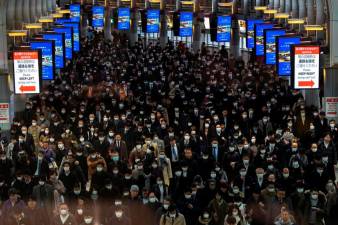 Kuroda’s comments, made in an emergency statement just days after a similar move by Federal Reserve Chair Jerome Powell, were welcomed by markets as a signal the world’s biggest central banks were mustering a coordinated response to the crisis.

Kuroda said financial markets have made “unstable movements” on heightening uncertainty over the impact on the economy from the epidemic.

“The BOJ will monitor developments carefully, and strive to stabilise markets and offer sufficient liquidity via market operations and asset purchases,“ he said.

The statement’s language suggested the BOJ will make full use of its existing tools to flood markets with funds, before pondering additional monetary easing steps.

In his own unscheduled statement issued on Friday, Powell said the Fed would “act as appropriate” to support the economy in the face of risks posed by the epidemic.

Goldman Sachs’ economists Jan Hatzius and Daan Struyven said Powell’s statement “strongly hints” at an interest rate cut at or even before the Fed meets on March 17-18, as well as the likelihood of coordinated action.

“Chair Powell’s statement on Friday suggests to us that global central bankers are intensely focused on the downside risks from the virus,“ Hatzius and Struyven said in a note.

“We suspect that they view the impact of a coordinated move on confidence as greater than the sum of the impacts of each individual move.”

Kuroda’s comments reinforced that view. Asian shares steadied from early losses on Monday as investors placed hopes on a coordinated global policy response to weather the damaging economic impact of the coronavirus epidemic.

But some analysts warned markets against betting too much on additional BOJ easing or globally coordinated rate cuts, given the dwindling tools some central banks have been left with.

Former BOJ board member Takahide Kiuchi said Kuroda’s statement was not a pre-announcement of an imminent easing.

“That will probably happen before any joint interest rate cuts are pondered. In any case, I don’t think conditions have worsened enough yet for these things to happen.”

As of Monday, Japan had 962 coronavirus cases, including 705 from Carnival Corp’s Diamond Princess cruise liner, which was quarantined near Tokyo last month, according to the public broadcaster, NHK.

Prime Minister Shinzo Abe said the government will announce a second batch of measures around March 10 to prevent the spread of the virus and mitigate its damage to the economy.

Any steps, however, will not involve big fiscal spending as Abe has repeatedly said the government will tap its 270 billion yen in budget reserves for now.

“We will carefully monitor developments and take steps without hesitation, as needed,“ Abe said.

Under a policy dubbed yield curve control, the BOJ guides short-term rates at -0.1% and pledges to cap long-term borrowing costs around zero. It also buys government bonds and risky assets, such as ETFs, as part of its massive stimulus programme. -Reuters