BOJ to ease policy in March as coronavirus hits growth 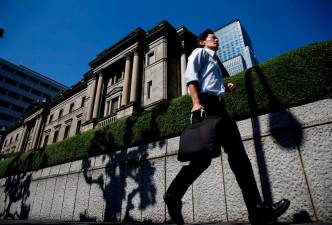 TOKYO: Japan will ease monetary policy this month, tracking the U.S. Federal Reserve’s surprise move this week, as the coronavirus jolts markets and stokes fears of a recession, a majority of economists polled by Reuters said.

Almost 90%, or 33 of 38 economists surveyed March 3-5, expected the Bank of Japan’s next move to be to expand monetary stimulus, a sharp turnaround from a February poll when only 30% expected easing.

Policymakers across the globe are under pressure to deploy monetary and fiscal measures to fend off the escalating risk from the coronavirus which has disrupted supply chains, restricted travel and cooled consumption.

Markets are speculating the BOJ, too, could ease monetary policy at its next rate review on March 18-19, or even before that if fears the economic fallout from the epidemic triggers a sharp stock price fall or an unwelcome yen spike that hurts Japan’s export-reliant economy.

Of the 33 economists who said the bank’s next move would be to ease, 23 expected the BOJ to top up stimulus this month, while six saw it happening during the April-June quarter. Others did not give a reply on the timing.

“To counter against the negative impact of COVID-19 on the Japanese economy and markets, the BOJ will likely ease further at the March policy meeting,” said Hiroshi Ugai, chief economist at JPMorgan Securities Japan.

Only 13% of economists now expect the BOJ’s next move to be an unwinding of stimulus, the poll showed, sharply down from 70% in last month’s survey.

Even those who predicted additional monetary easing by the BOJ were suspicious on whether the central bank would opt to deepen negative interest rates.

Ugai of JPMorgan also expected the BOJ to top up purchases of risky assets such as exchange-traded funds (ETFs), and launch a new fund-supplying operation to aid companies facing financial strain due to the health crisis.

Even as Japan’s confirmed coronavirus infections rose above 1,000 this week, the nation’s Olympics minister committed to hosting the summer games as planned from July.

Asked how a cancellation of the Games would affect Japan’s economy, 16 of 30 economists polled said any such decision would shave 0.1-0.3 percentage points off economic growth in the fiscal year beginning in April. The rest said more.

Japan’s economy is expected to grow only 0.1% in the new fiscal year from April, the poll found, revised down from 0.5% projected in February, as a bigger-than-expected contraction in the fourth quarter and the coronavirus outbreak could delay the economic recovery.

The economy shrank an annualised 6.3% in the December quarter, the fastest pace in almost six years, as a sales tax hike hit consumer and business spending.

Respondents to the poll forecast the economy would shrink an annualised 1.2% this quarter. If as projected, Japan would see growth contract for two straight quarters, meeting the technical definition of a recession.

Core consumer inflation, which excludes volatile fresh food costs, will grow 0.5% in the next fiscal year and the following one, the poll found. – Reuters