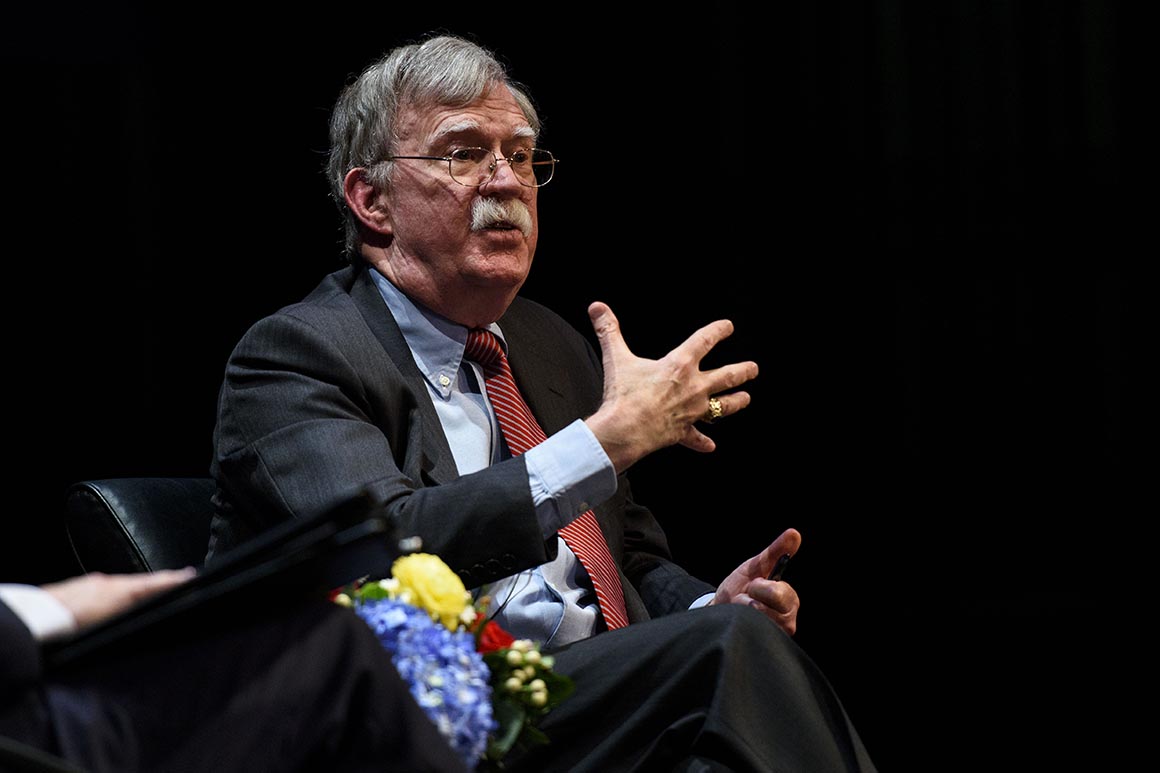 “The Government cannot plausibly argue that Ambassador Bolton has power to stop the Amazon delivery trucks in America, unshelve the copies in Europe, commandeer the copies in Canada, and repossess the copies sent to reviewers or in the possession of major newspapers,” Bolton’s lawyers argue.

DOJ contends that Bolton’s book is loaded with highly classified information that would damage national security if released, but Bolton’s attorneys contend government lawyers and top national security officials are embarked on nothing more than a political errand.

“The Government, at the behest of the White House, asks this Court to issue a prior restraint order suppressing the speech of his former National Security adviser … for the transparent purpose of preventing Ambassador Bolton from revealing embarrassing facts about the President’s conduct in office.”

While the filing late Thursday night from Bolton lawyers Chuck Cooper and Michael Kirk is replete with rhetoric about the high principles of the First Amendment, the hearing U.S. District Court Judge Royce Lamberth is set to hold Friday seems likely to focus on whether the temporary restraining order Justice Department lawyers are seeking will have any practical effect or amounts to a form of legal posturing.

Bolton’s submission to the court says such an order would be pointless since — in advance of the book’s scheduled publication date Tuesday — the contents of the book are already about in the national press and physical copies have even reached the White House grounds.

“The Government is asking the Court to order Ambassador Bolton to do something he is powerless to do. The practical reality is that neither Ambassador Bolton nor his publisher, Simon & Schuster, has any ability to stop copies from being sold to the general public on June 23,” Cooper and Kirk wrote.

“Indeed, the surreal nature of the Government’s request to enjoin publication and distribution of the book was driven home earlier today when a CBS News reporter, holding a copy of the book in her hand, questioned the President’s press secretary about passages in the book on the White House lawn,” the attorneys added.

Bolton, in particular, takes issue with the claim his book contains highly classified “compartmented” intelligence, which would trigger a higher standard of review. Bolton says he took great care to exclude such intelligence and submitted to a painstaking review with a White House national security official, Ellen Knight, to be certain. Knight concluded in April that the book contained no more classified information.

But Bolton says the process went off the rails shortly thereafter, when top aides to Trump intervened and initiated another layer of review, with the entire process delaying publication by several months.

Bolton’s lawyers seized on a series of public comments Trump has made about the book, making evident his anger over Bolton’s disclosures. The new filing from Trump’s estranged ex-adviser tries to leverage those remarks to argue that the grave warnings national security officials have submitted to the court are specious and pretextual.

Indeed, some of Trump’s remarks about the book in recent days and months have been so sweeping that they seemed to have the potential to upend the Justice Department’s effort if the judge takes them seriously.

Trump has repeatedly suggested the book is largely or completely fabricated. In a tweet Thursday morning, he called Bolton’s tome “a compilation of lies and made up stories.”

Trump has also claimed that all of his discussions with Bolton and other senior advisers are classified, suggesting he believes he has the legal right to use the Justice Department to gag White House staff indefinitely on every topic.

While aides with access to national security information do sign non-disclosure agreements, many presidential advisers have released memoirs and no court has ever suggested that a president can legally enforce silence by his former aides.

Accompanying the filing are Bolton’s communications with Knight throughout the review process, as well as extensive handwritten and typed notes of their conversations and proposed edits to eliminate classified information.

Bolton’s book alleges that Trump encouraged China’s construction of camps for its Uighur population, and that he pleaded with Chinese President Xi Jinping to purchase American agricultural products in order to aid his reelection. It also describes efforts by Trump to offer favors to autocratic leaders and affirms House Democrats’ impeachment evidence that Trump pressured the European ally to investigate his political rivals in exchange for military assistance.

Despite a series of written warnings from the White House not to proceed with publication of the book, Bolton’s lawyers also assert that — under the non-disclosure agreements Bolton signed — Knight’s verbal indication in April that she had no more edits amounted to approval to publish. Bolton insists that he then put the wheels in motion to have the book printed and released.

Bolton insists that he put the wheels in motion to publish his book in April, when Knight first indicated it contained no more classified material.

“Thus, at the time Ambassador Bolton proceeded with publishing his book—a decision that has long-since become irrevocable—he had absolutely no reason to believe that the book contained [compartmented intelligence,” Bolton’s attorneys write. “Indeed, quite the opposite: the Government had given him every reason to believe that it agreed with him that the book did not contain SCI.”