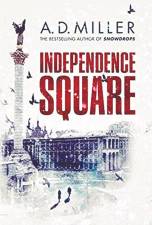 THIS is a story of ordinary people caught in extraordinary times. It is also a story about corruption and betrayals, and of how even to this day, power really corrupts.

The story began 12 years ago, when Simon Davey, a senior British diplomat in Kiev, helped prevent a tragedy, but it ended up ruining his life instead.

It all happened after a scandal involving a woman Simon loved broke out, causing him to lose everything.

Now back in London and still struggling with the aftermath of his disgrace, Simon is travelling on the Tube when he suddenly sees Olesya – the woman who caused his downfall 12 years ago.

He first met her on an icy night during the protests on Independence Square in Kiev.

Young and full of hope and idealism, Olesya could not know what a critical role she would play during those dangerous times ahead.

As a young idealistic woman, she climbed up the icy hill above Independence Square, desperate to avert the bloody crackdown that threatened the protesters below.

The outcome of a revolution, and her brother’s safety, depended on her.

And though neither of them realised it, so did the fate of the man she was frantic to see – Simon.

Back to the present day, when Simon decides to follow Olesya from the encounter in the Tube, he finds himself plunged back into the tragic days which changed his life forever.

He begins to see that her past was not what he thought it was, and neither is his own.

This novel is compelling and keeps you turning the pages, as author A.D. Miller writes with such a captivating style that examines the lives of human beings caught up in historical forces they can barely understand.

It has a powerful message that is still relevant today – that absolute power corrupts absolutely – and the story moves seamlessly between the euphoria of revolution and the intimate dramas of love and loyalty of the people involved.