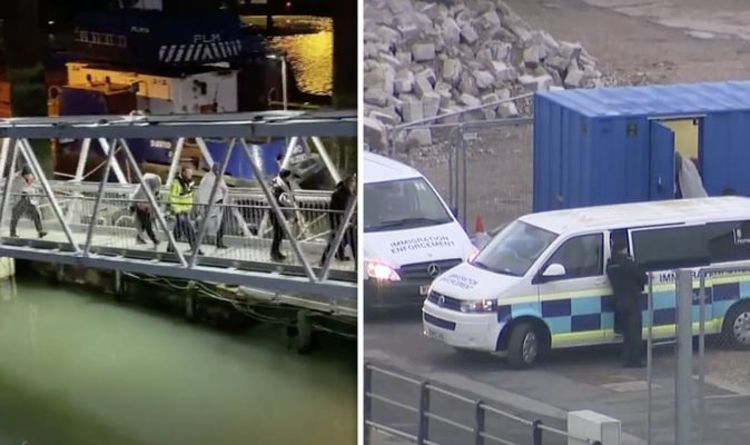 The Home Office has said that 49 people were rescued in the English Channel after trying to cross in the early hours of Boxing Day morning. Border Force officials were alerted to four small boats travelling across the Channel towards the UK coast at around 1.30am Thursday morning. Two Border Force cutters and a coastal patrol vessel (CPV) were deployed and intercepted the small boats.

Those on board the boats were transferred to one of the cutters and the CPV.

The group of suspected migrants consisted of men, women and one minor and presented themselves as Iranian, Iraqi and Afghan.

“Those who seek to come to the UK illegally and the ruthless criminals who facilitate journeys are all breaking the law and endangering lives.

“When people arrive on our shores unlawfully, we will work to return them to mainland Europe.

“In partnership with France, we target the criminals behind this form of people smuggling, to pre-empt crossings and stop boats from leaving French shores.

“There has been a doubling of patrols on French beaches and drones, specialist vehicles and detection equipment have been deployed to deter these illegal crossings.”

The group of suspected migrants will now be medically assessed and transferred to immigration officials for interview.

“We are committed to safeguarding life around the seas and coastal areas of this country.

“HM Coastguard is only concerned with preservation of life, rescuing those in trouble and bringing them safely back to shore, where they will be handed over to the relevant partner emergency services or authorities.”

He said that it was just after 6am when the first border force vessel returned with the suspected migrants who were then led ashore.

Bradshaw said: “They were brought up that gangway, they were spoken to by Border Force officials, they were photographed, many of them were wearing blankets, many of them had life jackets on, which were taken off by those officials when they got to the top of that gangway and put in a pile to one side, and they were led to [a] shipping container where they were given hot drinks and blankets.”

Since January 2019, over 120 migrants who entered the UK illegally via small boats have been returned to Europe, figures from the Home Office state.

In the last year, since December 2018-2019, there have been 16 successful French prosecutions which have seen 30 individuals convicted with sentences ranging from three months to six years.