Boris back in the driving seat as he gets update... 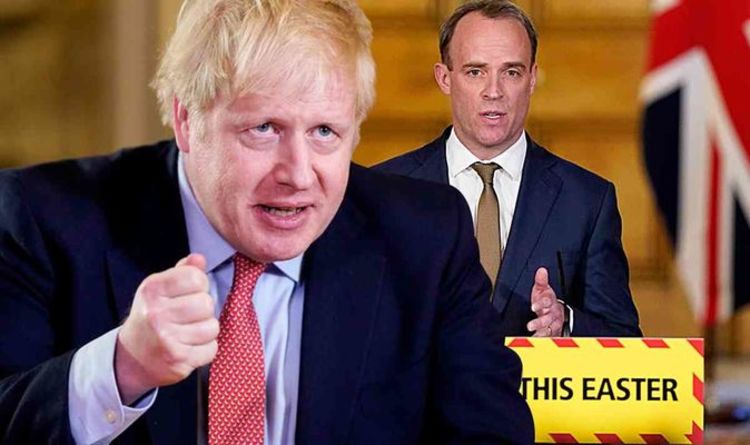 Mr Johnson made contact with his deputy over the weekend as he aims to keep a watch on his Government’s actions while he is recovering from the virus which nearly killed him a week ago today. Last Monday Britain was in shock when they were told the Prime Minister had been rushed to intensive care at St Thomas’ Hospital in London.

While No10 insisted his admission to the unit was nothing more than a precaution, Mr Johnson has since said it was “touch and go” whether he would live.

The Uxbridge MP’s medical team have warned the Prime Minister he must rest or run the risk of relapsing into illness.

The Prime Minister’s spokesman said at lunchtime Mr Johnson is “not immediately returning to work” and he will be “guided by the advice of his doctors”.

However, that has not stopped him from phoning Mr Raab to get an update on the nation’s fight against coronavirus.

Foreign Secretary Dominic Raab at today’s daily press briefing: “On Saturday I spoke to the Prime Minister and updated him on coronavirus and the strategy over the next few weeks.”

The Foreign Secretary then said he joined the Prime Minister in sending a “heartfelt thanks to the team at St Thomas’ hospital and all NHS frontline staff over the weekend”.

He added: “We thank you, we pay tribute to you and we are immensely proud”.

Mr Johnson left hospital yesterday and has travelled to the prime Minister’s official country residence in Buckinghamshire to continue his recovery.

The Conservative leader has been spotted walking with his pregnant fiancee Carrie Symonds and their pet dog in the tranquil grounds of the Chequers estate.

One Cabinet source told The Telegraph: “The prime minister has to take that decision.

“Any lockdown will have huge implications, and the PM will be responsible for it, so he’s got to be the one making that decision.’

However, not everyone in the Cabinet agrees.

Some ministers are of the view that Foreign Secretary Dominic Raab, who is deputising for Mr Johnson, can take the decision without involving the PM.

A source said: “I don’t think the Cabinet wants to be pulling the Prime Minister out of his recovery and risking him getting worse.”

Before Mr Johnson went to St Thomas’ hospital, he had the foresight to pass the baton to the first secretary of state, Dominic Raab, who would combine some prime ministerial responsibilities with those of his day job of Foreign Secretary.

Mr Raab’s primary duty has been to chair meetings of the cabinet and cabinet committees.

Mr Raab has said that he is acting under clear instructions from the prime minister.

He has not been given the full ministerial roles of a Prime Minister.

He cannot fire Government ministers, nor can he appoint new ones, and he will not be meeting the Queen once per week as a Prime Minister is scheduled to do.

The decision as to when the Prime Minister will return to work will possibly be announced on Thursday of this week, according to a No10 source.

Some senior ministers are already said to be pushing for him to be involved in the decision on whether the UK’s lockdown will be extended.

An extension of the social distancing restrictions is viewed as a formality but the duration is still up for discussion with some adamant it must be Mr Johnson’s decision.

back, Boris, Chequers, driving, from, gets, Raab, recovering’, seat, update