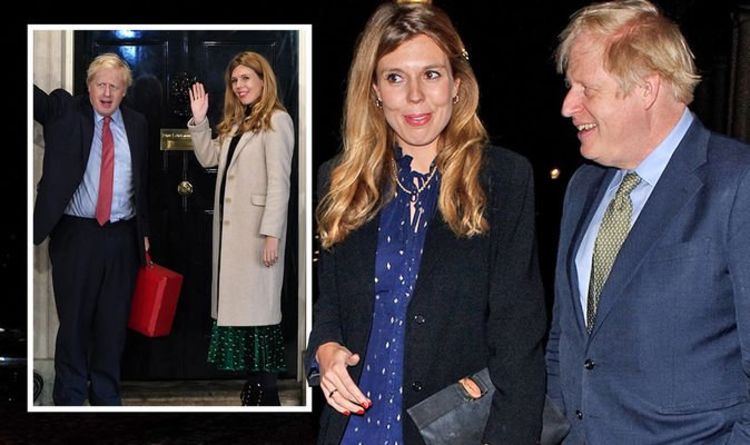 Ms Symonds, 31, is the first ever unmarried partner of a Prime Minister to live in 10 Downing Street.

The couple have been living inside Number 10 since Mr Johnson won the race to succeed Theresa May in July.

The shock announcement comes as the Prime Minister has been criticised for his lack of public appearances during the flood crisis in the UK.

A number 10 source said: “Boris and Carrie are both delighted at this news.

“They have both known for a while but have kept it under wraps until the pregnancy progressed.

“It partly explains why he has been lying low recently – although he works flat out and that won’t change.

“Carrie is thrilled and she will also continue to work on her environmental projects.”

The couple were engaged in a relationship when the Prime Minister was still married to his second wife, Marina Wheeler.

Earlier this month, a court heard Mr Johnson and his estranged second wife Marina Wheeler were preparing to end their marriage after reaching a financial settlement.

Mr Johnson and Ms Wheeler have four children together and separated in 2018 after getting married in 1993.

Mr Johnson met his first wife, Allegra Mostyn-Owen, while they were students at Oxford University.

They married in 1987 but they decided to divorce six years later.

Former Scottish Conservatives leader Ruth Davidson was one of the first to congratulate the Prime Minister on the news.

Former chancellor Sajid Javid, who resigned from Government after a dispute with Mr Johnson, offered the couple his congratulations, tweeting it was ”wonderful news!”

Ms Symonds has already dipped her toe into public life when on August 16 last year she made her first public appearance since entering 10 Downing Street addressing what she called the “gigantic” climate crisis.

Ms Symonds is regularly referred to as a PR guru and indeed she has a very glittering background – her parents are Matthew Symonds, one of the founders of The Independent newspaper, and Josephine Mcaffee who was one of the paper’s lawyer.

She grew up in East Sheen, South West London, and was a pupil at the posh Godolphin and Latymer School in Hammersmith.

In her work as senior adviser at Oceana supporting the Bloomberg Foundation’s Vibrant Oceans Initiative she helps run the “Save the Oceans, Feed the World” Initiative and Oceana’s campaign to reduce the use of plastics.