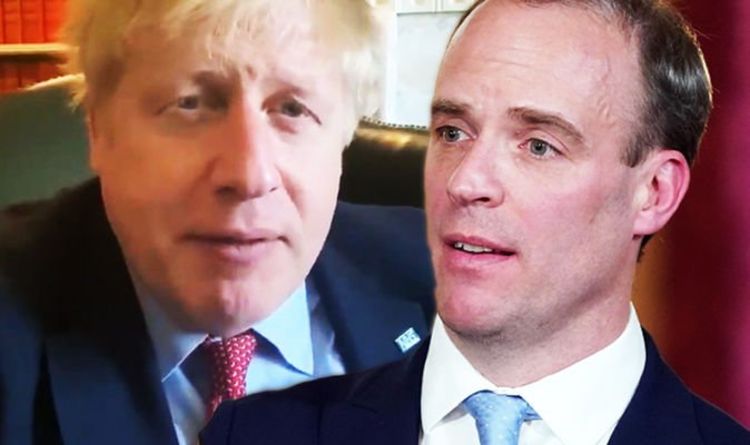 The Prime Minister was taken to St Thomas’ Hospital as a precaution on Sunday but after his health deteriorated, he was transferred to intensive care on Monday night. It was reported that Mr Johnson was given oxygen after he struggled to breathe. A statement from Downing Street confirmed Mr Johnson was in good spirits after being transferred last night.

The spokesman said: “The Prime Minister has been stable overnight and remains in good spirits.

“He is receiving standard oxygen treatment and breathing without any other assistance.

“He has not required mechanical ventilation or non-invasive respiratory support.”

Downing Street also confirmed Mr Johnson did not have pneumonia.

Speaking at the daily press conference, Mr Raab, who is deputising for the Prime Minister, gave further details on Mr Johnson’s progress.

He said the Tory MP was in a stable condition and he was “continuing to be monitored”.

Describing Mr Johnson as a friend, he added: “He’s not just a prime minister, he’s not just our boss, he’s a colleague and a friend.

“One thing I do know about this PM is that he’s a fighter.”

If Mr Raab falls ill, he will be replaced by Chancellor Rishi Sunak.

The Queen has been and will be kept up to date on his condition.

“We informed you all as soon as was practically possible. We have a commitment to be as transparent as we can be throughout this process.”

Although Mr Raab was chosen to deputise as the interim leader, there is no defined Deputy Prime Minister.

The last Tory MP to do so was Lord Michael Heseltine.

He said Mr Raab will now be in a difficult position going forward.

He added: “He will be surrounded by lots of people who know what Boris Johnson said, believe Boris will be quickly back and have their own personal agendas anyway.”