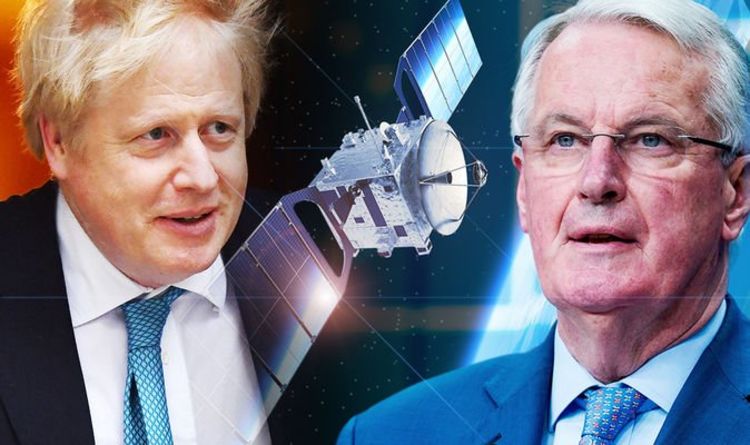 Under the withdrawal agreement struck with the European Commission by Boris Johnson last year, the UK will continue following most of the EU’s rules during a transition period running until the end of this year. But, in a defiant stance, Michael Gove warned the EU this morning that the UK is prepared to walk away from trade talks in June unless clear progress is being made in the negotiations. The warning – which is likely to cause fury in Brussels – came as Downing Street published a 30-page document setting out what it wants to achieve in the talks, which are due to start on Monday.

Galileo is set to be a major talking point, after the EU claimed its most crucial feature – the Public Regulated Service (PRS) – would only be accessible for bloc members after the first satellite launches in 2020, despite the UK working on the “brains and heart” of the main features.

This prompted the Government to start planning for a UK Global Navigation Satellite System (GNSS) alternative, which Mr Johnson backed as one of his first acts in office.

He said: “Let’s get going now on our own position navigation and timing satellite and earth observation systems – UK assets orbiting in space with all the long-term strategic and commercial benefits for this country.”

The European Commission has since changed their stance, with its outlines for negotiations teasing “the possibility for access to the PRS”.

However, the EU will not allow the UK to continue its work developing the main parts of Galileo over the next decade, due to security fears.

The Ministry of Defence has already warned Mr Johnson about this, and the Government agreed it would not be in the UK’s security interests to use the system’s secure elements if it had not been fully involved in their development.

It is unlikely Mr Johnson will strike any Galileo deal without the EU renewing British contracts for the development of its main components.

Therefore, the UK Space Agency, partnered with the Ministry of Defence pushed forward with plans for a UK GNSS.

Former Science Minister Chris Skidmore, who was sacked during Mr Johnson’s Cabinet reshuffle this month, told Express.co.uk readers that a £5billion programme would be announced in March 2020.

He said: “The Ministry of Defence decided it wasn’t in our interest, as part of national security, for it to continue knowing that we weren’t going to be part of the key parts.

“So the early decision was taken to build our own GNSS satellite programme as at the moment we have an over-reliance on the US GPS system.

“If that goes down, we realised, we’re in trouble, so we looked at setting up our own system.

“The UK Space Agency won’t let me go into detail about the specific companies, but next year, around March time, there will be a £5billion programme announced.