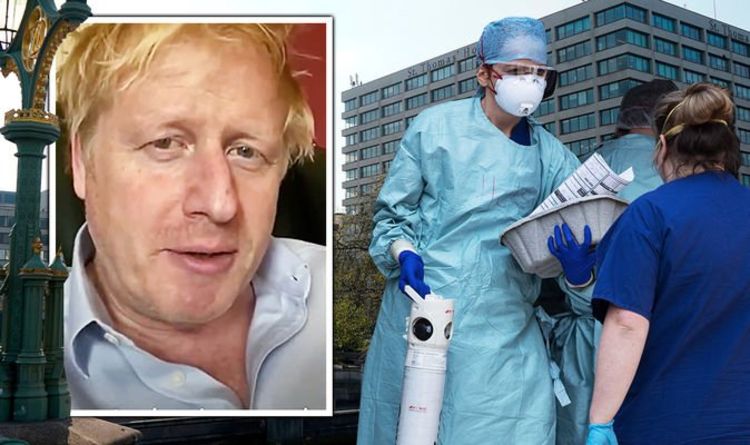 Friends said the coronavirus-hit Prime Minister was “euphoric” after surviving his brush with death – and told them the care he received had been “exemplary”. One senior official said: “It was terrifying how fast things happened. When he was finally moved out of intensive care it was such a massive lift – you could feel everyone, including the whole of No10, breathe a collective sigh of relief.”

Mr Johnson waved at doctors and nurses as he was wheeled to an ordinary ward on Thursday evening, a top aide added.

As he continued his recovery yesterday at St Thomas’ Hospital in London, it was revealed that a further 917 people had died from the virus in hospitals in Britain. The latest daily toll – slightly lower than Friday’s record 980 – brings the total to 9,875, including at least 19 NHS workers.

There have been 78,991 recorded cases of the disease.

Among the latest to die was a child aged 11, one of the youngest victims of the pandemic.

In the midst of national mourning, the Queen issued her first ever Easter message, saying: “We know that coronavirus will not overcome us. As dark as death can be – particularly for those suffering with grief – light and life are greater.”

But an insider suggested it will take some time for him to fully recover. They said: “He is sitting up in bed but he is going to take the advice of doctors and rest over the coming weeks.”

Details have emerged of how the Prime Minister’s health took a dramatic turn for the worse as he tried to fight Covid-19 while leading the effort to get Britain through the crisis.

At 11am last Saturday – April 4 – nine days after he first felt unwell, his diary was cleared as it became obvious that his symptoms were not going away.

On Sunday at 8pm he was rushed to hospital, accompanied by his security officers, on the advice of his doctor. On his way to St Thomas’, near Waterloo, he told aides that Foreign Secretary Dominic Raab should chair the morning meetings and stand in for other duties.

Cabinet members were hastily assembled to a conference call just after 8pm so they could be told the news before a public announcement. Michael Gove told the meeting: “I think I speak for everyone when I say our thoughts and prayers are with the Prime Minister.”

But by Monday evening Mr Johnson’s condition had worsened and he was moved into intensive care and given oxygen.

With his life potentially in the balance and the possibility he might need to be sedated and put on a ventilator, his private secretary Martin Reynolds informed his counterpart at Buckingham Palace of the situation.

A senior official at Downing Street said: “Every day we were waiting for news from the hospital, hoping for a bit of good news. But you couldn’t get the fear out of your head that he could take a turn for the worst.”

The insider added: “Everybody pulled together and made sure we steadied the ship. Dom Raab kept everyone completely focused on the task at hand and made sure we didn’t take our foot off the gas.”

Meanwhile, Mr Johnson’s pregnant fiancée Carrie Symonds, 32, sent him daily letters with pictures of the scans of their baby, expected in the summer. On Thursday evening, when he left intensive care, she tweeted emojis of clapping hands and a picture of a rainbow, which has come to symbolise gratitude to the NHS.

Yesterday Home Secretary Priti Patel, who has been a friend and political ally of Mr Johnson’s for years, said at the Downing Street press conference: “The message to the Prime minister is that we want him to get better and he needs some time and some space to rest, recuperate and recover. That is the priority right now.”

Mr Johnson’s personal reputation has been boosted by his bravery and handling of thecoronavirus crisis, a poll for the Sunday Express reveals.

Some 52 per cent say they have a more positive view of him, including 40 per cent of Labour voters.