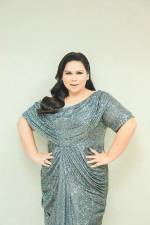 ACTRESS and TV presenter Shariffah Mariam Syed Abdullah Al Hadad, better known as Sherry Alhadad, has a wicked sense of humour that brightens up any room.

It’s no wonder that this funny girl is currently one of the most sought after TV presenters and emcees.

She has always dreamed of entertaining people and bringing bright smiles to their faces.

She has a diploma in acting, as well as a degree in directing from Akademi Seni Warisan Kebangsaan (Aswara).

She first made her name on the stage, before moving to the screen, with roles in both telefilms and feature films such as Rembat, My Stupid Boss and Gol & Gincu Vol. 2.

She is also busy preparing for her stage show in mid-June titled Perempuan Power where she will be performing comedy sketches.

What is your worst childhood memory?

“When I was nine, my father, who had retired from the army, died from a stroke. I was very close to him. His death affected me very much.”

You have acted on stage and on screen. What is your favourite medium?

“This is not the case with the screen. You shoot your scenes randomly. You may shoot the last scene on the first day of your shoot. The film editor will paste all the scenes together in his lab.

So I feel you [cannot stay] in character onscreen.

“I also love the fact that you get instant reactions onstage. You can feed on the energy from your audience and it motivates you to give a more robust performance.

“Frankly speaking, I have problems watching myself onscreen. I get annoyed … My gestures are so exaggerated. When you do theatre, everything has to be big, from your emotions to your expression.

Sometimes, foolishly, I bring this element to the screen and what works for the stage will not work for the screen.”

You have been subjected to fat shaming several times in your career. How do you feel about that?

“When I was studying in Aswara, I went to audition for plays that the students were directing. I was never chosen. I understood their motivation for not taking me. So I created my own opportunities.

“I directed a play called Kalaulah Kalau, where it was a solo show where I talked about my desire to be a thin woman, in a funny manner. Everyone loved the play and began to see me in a different light.

“I remember the first time I hosted an entertainment television show, everyone was just talking about my size on social media. They told the producer to get rid of me because of my size. Nobody talked about the good job I was doing.

“Of course I felt sad that people judged me [over my appearance]. It hurt to read all those harsh comments.

“I am not the kind of person who will cry in one corner, and complain why life has been unfair to me.

“You just need to learn to rise above all that.

“You need to love yourself first before others can love you.”

You turned 36 this year. The entertainment industry is known to have an ageist attitude. Are you afraid you will get fewer opportunities as you grow older?

“I used to be afraid of that. I thought that when I turn 40, my career will be over. Now I do not think so.

“I believe I can always go behind the camera, as a producer, director and screenwriter.

“I have directed stage plays before. I have written for stage productions. I can direct more stage plays. I can write more plays.

“Who knows? I might want to direct my first screen production.

“I have started a production house with Farah Rani (a stage actress) and Shamaine Othman (film director-cum-stand up comedian) called Perempuan Productions.

Would you like to change anything about your career?

“Onstage, I do play a great variety of roles. But onscreen, I always get stereotyped. I only get comedy roles. I would like that to change.

“For example, I would like to play a role like the one Kathy Bates did in [1990 psychological horror film] Misery.”

In Misery, there is a scene where Kathy Bates smashed the legs of her captive with a sledgehammer. Whose legs would you like to smash if given the chance to do so?

“Your legs. You are a writer, too, just like the character in the film [laughs].”