Bradley Walsh: ‘Do you wish you had talent?’ The Chase star left stunned by on-air swipe 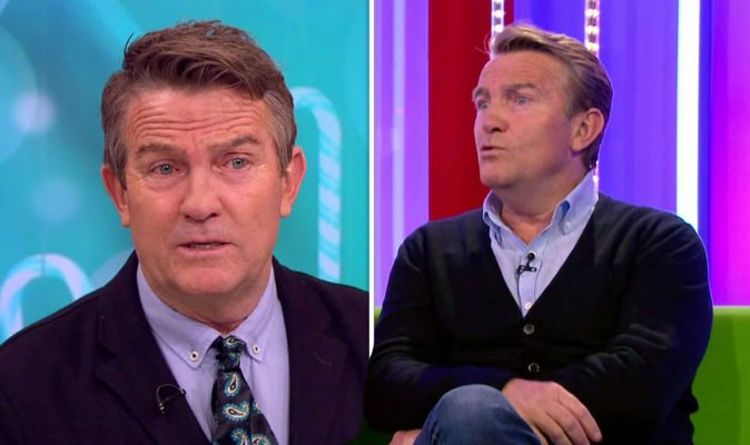 The Chase host Bradley Walsh, 59, showcased his singing talents live on the show, while his son Barney played the piano. Following this, the duo received a round of applause from the show’s guests.

Host Simon Rimmer, 56, then joked that Bradley was “embarrassing”, before Tim Lovejoy, 51, queried: “Do you wish you had a talent Bradley?”

As he struggled to contain his laughter, he spat out some of the beverage into a mug.

“That’s how you do comedy,” Barney, 23, chimed, which prompted Bradley to laugh even more.

The ITV regular, who had the best selling debut album in the UK back in 2016, and his son were on to discuss their show Bradley Walsh & Son: Breaking Dad.

Reflecting on the moment, Barney admitted he was worried for his dad as he believes they took it too far.

Speaking on This Morning, the son of the Doctor Who star said: “I don’t wanna spoil it because it’s in a later episode but there was one point that I thought I’d taken it too far.

“I was surprised,” he divulged. “I didn’t think it would catch on like it did.”

Barney added: “We ended up inspiring families, which I loved, I thought that was incredible.”

As well as facing his fears, the father-of-two will also be hosting the return of The Chase this evening.

Ahead of its return, the host fronted new show Cash Strapped, which replaced The Chase temporarily.

Speaking of the new series of The Chase recently, the host teased that viewers will see a new chaser on the show.

By bshilliday The Rock wins at Instagram throwback photos once again. This time he shared a photo as a child dressed in his dad’s wrestling boots,...
Read more