Bradley Walsh leaves The Chase player mortified by calling out... 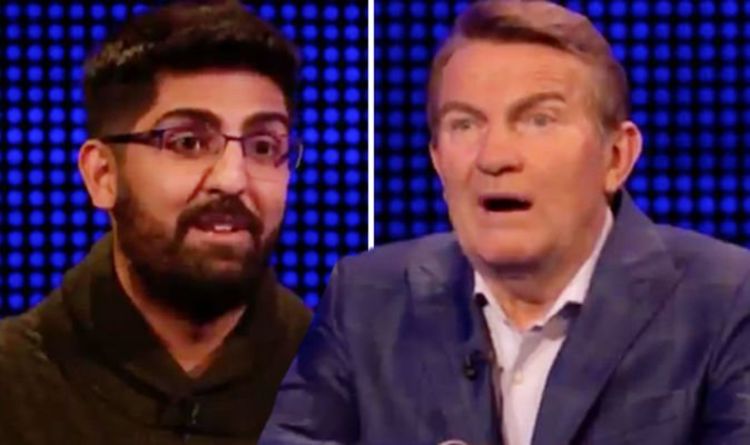 Bradley Walsh, 60, was on hand to help player Shamit and his three teammates win big on another instalment of The Chase. The contestants were tasked on taking on Anne “The Governess” Hegerty, 62, in order to get their hands on a share of the jackpot prize. However, appearing on the ITV quiz show seemed to make the expectant father really nervous and as a result, he completely forgot his wife’s name.

Shamit had explained to the host he wanted to get his hands on some extra cash to help him with the imminent arrival of his and his wife’s new baby.

When the player had completed his cash-builder round, it was time for him to face Anne and at this moment, the pressure got to him.

The presenter asked the contestant what his wife’s name was and for several seconds, the quizzing amateur had to really think about his answer.

Calling him out on the error, Bradley said: “If you’re forgetting your own wife’s name at the table, you’re in big trouble.”

Mortified by the blunder, Shamit couldn’t help but shake his head and the host joked he should be feeling embarrassed.

“That is not good on national telly,” he joked before commencing the head-to-head round between the contestant and Anne.

“Good luck,” the presenter commented, going on to explain he was wishing him “luck” for when he “got home” and saw his wife after forgetting her name.

Unfortunately and despite his best efforts, Shamit was defeated by The Governess and bid Bradley a fond farewell.

Taking to Twitter, those watching at home comically remarked about the player’s blunder and the reaction he would get at home.

Bethan seemed to be the one to help him out as she secured £8,000 during her cash-builder round and admitted she was “quite surprised” at how well she did.

Again, she managed to defeat Anne but that was where the success stopped for the team as Jenny failed to make it back for the Final Chase as well as Shamit.

The grandmother put on a strong front, however, and opted to play big by taking on The Governess with over £60,000 at stake.

This meant the jackpot was locked at £14,000 ahead of the concluding round of the game, with John and Bethan accumulating 14 points which the quizmaster would have to match in order to defeat them.