Spiral galaxies look nice and tidy, with most of their stars and gas confined to a disc neatly arranged in swirling spiral arms. But there’s a lot more to a galaxy than what we can see, as a new image of invisible phenomena adroitly demonstrates.

The image shows a galaxy called NGC 4217, around 67 million light-years from the Milky Way, viewed edge-on – and pictured amidst a mapped visualisation of the galaxy’s vast, complex magnetic field, sprawling out some 22,500 light-years into the space around NGC 4217.

Since we don’t know much about how galactic magnetic fields are generated and maintained, astronomers are hoping lessons learnt from this new map could be applied to our home galaxy, the Milky Way.

“Galaxy NGC 4217 is of particular interest to us,” said astronomer and physicist Yelena Stein, formerly of Ruhr-Universität Bochum in Germany, and now at the Centre de Données astronomiques de Strasbourg in France.

“This image clearly shows that when we think of galaxies like the Milky Way, we should not forget that they have galaxy-wide magnetic fields,” she added.

Magnetic fields are invisible fields that exert a force on particles that are magnetically sensitive. They can be generated by magnets, but also by electric currents and changing electric fields.

Just because magnetic fields are invisible doesn’t mean they’re undetectable, though. Astronomers have a very clever way of detecting magnetic fields in distant galaxies, starting with cosmic rays, which are subatomic particles travelling at significant fractions of the speed of light as they stream through space.

When cosmic ray electrons are accelerated in the shock fronts of supernova remnants, they can be accelerated almost to light speed. These relativistic electrons then spiral along magnetic field lines, generating radio waves called synchrotron emission across a wide range of wavelengths. A synchrotron is an electron accelerator.

This is the technique the team used to map the magnetic field around NGC 4217, using the Karl G. Jansky Very Large Array radio astronomy observatory in New Mexico, and the Low-Frequency Array radio telescope network, headquartered in the Netherlands. 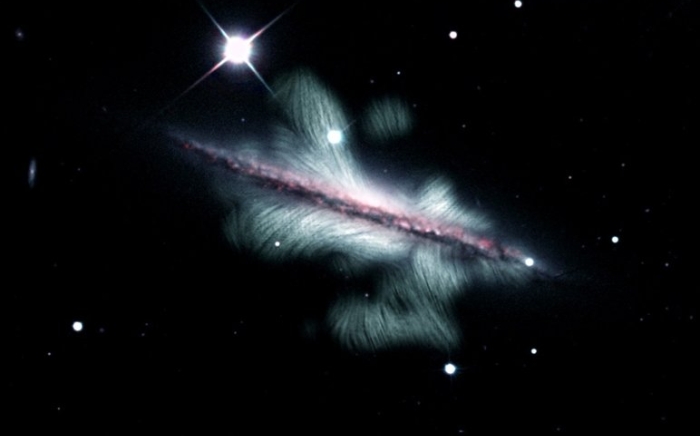 It is huge, though, extending up to 22,500 light-years above and below the galactic disc. This is not unusual; several star-forming galaxies viewed edge-on have a similarly shaped magnetic field.

In addition, the team found a helix-shaped structure, and two large “superbubble” structures. These superbubbles form in two types of regions: those where many massive stars end their lives in supernovae; and those where stars are born, a process that generates intense stellar winds. The same structures at the two different locations suggest the processes could be linked.

“It is fascinating that we discover unexpected phenomena in every galaxy whenever we use radio polarisation measurements,” said astronomer Rainer Beck of the Max Planck Institute for Radio Astronomy in Germany.

“Here in NGC 4217, it is huge magnetic gas bubbles and a helix magnetic field that spirals upwards into the galaxy’s halo.”

The researchers also found something really strange – large loops in the magnetic field along the entire galaxy.

“This has never been observed before,” Stein said. “We suspect that the structures are caused by star formation, because at these points matter is thrown outward.”

Although the mechanism behind galactic magnetic fields is unclear, the leading hypothesis is that it’s generated and maintained by a dynamo. This is a rotating, convecting, and electrically conducting fluid that converts kinetic energy into magnetic energy.

In Earth, that fluid is molten iron in the outer core. In the Sun, that fluid is plasma. In disc galaxies, the dynamo fluid is also thought to be plasma. I’s possible, the researchers note, that supernova explosions and the Coriolis force combine with shear motion to create large-scale, regular magnetic fields, while infalling gas can create turbulence that results in asymmetry.

The research has been published in Astronomy & Astrophysics.

Our planet contains all the known ingredients required for life as we know it. These include liquid water, at least one source of energy,...
Read more