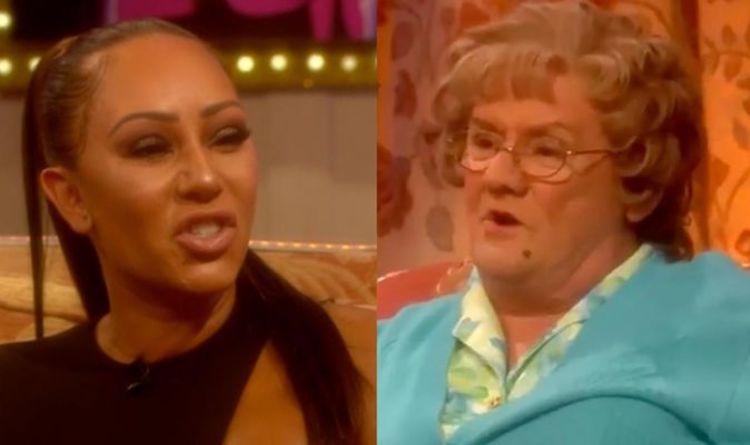 During tonight’s episode of BBC’s All Round To Mrs Brown’s, Brendan O’Carroll, 64, who stars as the legendary Agnes Brown, took a swipe at Mel B, 44, former singer of The Spice Girls while talking to the star about living with her girl band. Brendan O’Carroll asked Mel B to tell her which Spice Girl was “the b****”.

Soon after Channel 4’s new Great British Bake Off presenter, Matt Lucas, 46, spoke about how he and Pitch Perfect’s Rebel Wilson, 40 lived together for 3 years, Cathy Brown (played by Jennifer Gibney, 55), asked Mel B if the Spice Girls used to live together.

In response, the former singer said: “Yeah we did, it was good. I shared a room with Mel C, Victoria had her own room, and Geri and Emma shared a room.”

Soon after Mel gave her answer, Agnes Brown (played by Brendan O’Carroll) blurted out: “Apart from yourself, who’s the b****?” leaving the audience and Mel to roar with laughter.

The songwriter then admitted: “I don’t think any of us are b*****!” Which led Agnes to hit her back with: “Oh you liar!”

Cathy Brown, Agnes’ daughter, then continued to ask Mel: “Did you draw straws for who got the room on their own?”

After the TV star told them “no” the Little Britain star then added: “How did she get that?” While referring to the fact that Victoria Beckham had her own bedroom.

In response, Mel then said: “I just don’t think anybody wanted to share with her!” Which led all of them into hysterics.

The host then went on to reveal: “It’s really interesting to hear people’s opinions and views on dating apps, and what to do on a first date, second date, third date.

“I just literally sit there. I’m like the confession box and they just tell me everything! I’m like ‘no way!'”

Matt, also spoke about his new podcast: “I’ve got a podcast which is on the BBC Sounds app, and it’s also going to be broadcast on Radio 2 around now.