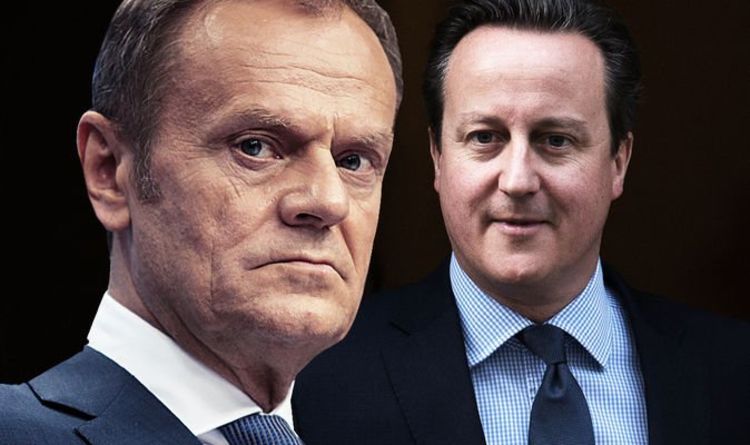 Prime Minister Boris Johnson “got Brexit done” on January 31, bringing an end to years of political stalemate. Now, as the UK finds itself in transition, David Frost’s team is at odds with Michel Barnier’s while both parties thrash out a workable deal. Negotiating with Brussels has never been easy, though, as David Cameron found out prior to the 2016 referendum.

After nine months of negotiating, Mr Cameron arrived in Brussels for crunch talks on February 19, 2016, hoping to come back with a deal capable of persuading the British public that staying in the EU was worthwhile.

The mood was bleak as the British delegation room was “brightened only by piles of Haribo”, Tim Shipman recalls in his 2016 book ‘All Out War: The Full Story of How Brexit Sank Britain’s Political Class’.

The former Prime Minister made two big gambles before arriving for the summit, namely his bid to block Jean-Claude Juncker’s appointment as Commission President and the call to support Donald Tusk’s bid to be President of the European Council.

The two of them would later be charged with “solving the British problem”.

Mr Tusk was given support in an attempt to “woo the Poles” who were “crucial on any deal on migrant benefits”.

However, the aide added: “We vastly overestimated Tusk’s capabilities.

“We got a stuttering Polish prime minister whose command of the English language was not great and who struggled with the job.”

To make matters worse for Mr Cameron, the appointment led to a general election in Poland, which Tusk’s Civic Platform party lost.

Sir Ivan added: “Even though you think Juncker is a clown, it could end up being him.”

That evening, Peter Altmaier, her chief of staff at the German Chancellery, made a deal with Martin Selmayr, the German Commission insider who later became Mr Juncker’s chief of staff, to ensure he got the job.

Mr Shipman recalls that, while this was going on, Downing Street spin doctors “briefed stories about Juncker drinking whisky for breakfast”.

When Mr Cameron demanded a show of dissenting hands the following day, just one rose alongside his own – that of Hungary’s Viktor Orban.