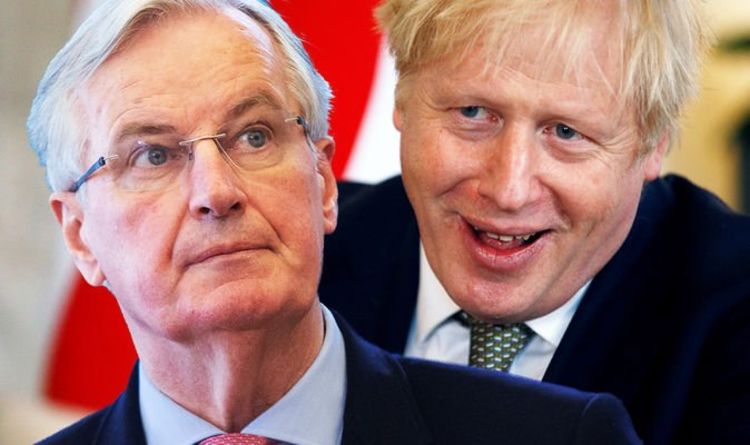 An official negotiating document revealed the EU will be “flexible” around the idea of breaking up negotiations into a series of agreements. It will come as a welcome boost for the Prime Minister, who wants to secure a deal by December 2020. Michel Barnier’s team told EU officials and diplomats that the bloc is willing to conclude a basic trade agreement that can be upgraded in the future.

EU negotiators will focus on a deal that maintains trade flows between the UK and the Continent after the country exits the Brexit transition period after December 2020.

The bloc will prioritise “substance over form” after Mr Johnson ruled out extending the transition period, which keeps the UK inside the EU’s single market and customs union.

The move allows for more complicate agreements, in areas such as haulage, to be thrashed out at a “later stage”.

While other agreements, such as fisheries and financial services, could be stuck “at the same time as a trade deal this year”.

It comes amid calls from Downing Street for Brussels to be more creative and accusations that the bloc is dragging its feet over trade talks after it said on Monday that negotiations would start until March.

Diplomats were also briefed that eurocrats will seek a “single comprehensive agreement” that brings together a relationship in both trade and security.

But Brussels will not make a final decision on whether the main deal needs to be ratified by all 27 EU capitals until talks have come to an end.

This leaves the potential threat of regional parliaments wielding a veto over the agreement, such as Belgium’s Walloons, who rejected the bloc’s deal with Canada in 2016.

Brussels’s negotiating strategy emerged after the bloc’s officials admitted they would not be ready to start negotiations until March, warning it could “take some time” until they are prepared, despite the UK being ready to begin thrashing out a deal immediately.

The setback is likely to frustrate Boris Johnson, who said Britain wants trade talks to start the morning after Brexit and be finalised by the end of the year.

A European Commission spokesman said: “The commission can adopt its proposal for the negotiation directives only once the UK has actually withdrawn from the EU.

MUST READ: Can the Lords block Brexit? House of Lords role explained

A spokesman for the Prime Minister said Britain is ready to begin trade negotiations with the EU immediately.

He said: “We are clear what we want to achieve. The EU is obviously going through a process of deciding what its position will be going into these discussions. We are ready to start negotiating from February 1.”

The UK is set to leave the EU on January 31, but will enter into the Brexit transition period until the end of the year.

During that time, the UK will continue to follow the EU’s rulebook while attempting to hammer out the terms of their future relationship.

ByNevertheless, we want to give our readers the chance to remain spooky with our bespoke Halloween masks giveawayYou’ll receive three of our most spine-chilling...
Read more