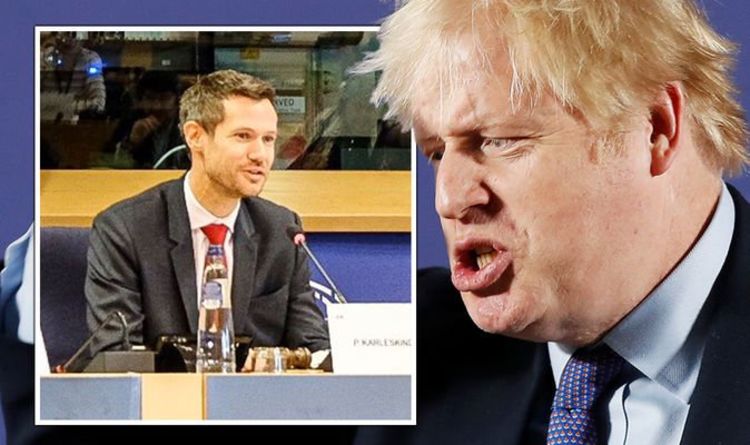 France’s Pierre Karleskind, the newly-elected chairman of the institution’s fisheries committee, insisted European vessels must have the “same situation” in any future trade with the UK. Speaking in Brussels, he said the bloc’s demand is just “one condition” for a free-trade agreement ahead of the formal negotiations. The Frenchman said “We request reciprocal access to waters, meaning the same situation as we have now – nothing more, nothing less – with this being one condition for concluding the economic partnership.”

Mr Karleskind, who is from northern France and a member of Emmanuel Macron’s En Marche party, declared he was “happy” to take up the new role as he replaces former British MEP Chris Davies.

He said the EU’s negotiating mandate would continue to be “dense” when it comes to securing a fisheries pact with the UK.

In a social media post after being handed his new role, Mr Karleskind signalled no fewer than nine EU capitals would demand access to Britain’s waters before rubber-stamping a trade deal.

“Fishing is at the same time very symbolic,” he said.

“It is very important for coastal territories of nine member states in the European Union.”

The deal “should aim to avoid economic dislocation for Union fishermen that been engaged in fishing activities in the United Kingdom waters”, a draft negotiating document states.

EU ambassadors are expected to finalise the text during a meeting later this afternoon.

Negotiations between Britain and Brussels are set to get off to a bad-tempered start after multiple clashes in recent days.

Stefaan De Rynck, an aide to Mr Barnier, accused the UK of abandoning its commitment to “level-playing field” provisions in exchange for a trade deal with Brussels.

Speaking at the London School of Economics, the advisor said Boris Johnson was failing to honour the “level of ambition” agreed in last year’s divorce deal.

MUST READ: Boris Johnson announces working visa overhaul – will YOU be affected?

He added: “Some in the UK now seem to want to become Canadians. But, Dover is much closer to Calais than Ottawa is.

“So, in terms of zero-tariff, zero-quota access, this brings a lot of benefits to the UK economy and with benefits come obligations.”

Downing Street last night infuriated Brussels sparking a social media spat with a tweet which claimed Mr Barnier had shifted the goalposts on offering the UK a Canada-style free-trade agreement.

Number 10 tweeted: “In 2017 the EU showed on their own slide that a Canada type FTA was the only available relationship for the UK. Now they say it’s not on offer after all. Michel Barnier what’s changed?”

He said: “I have no time to lose in controversies right now.

“I can recommend, on both sides, that we remain calm and face the reality, the truth and the economic, social and human consequences of Brexit.”