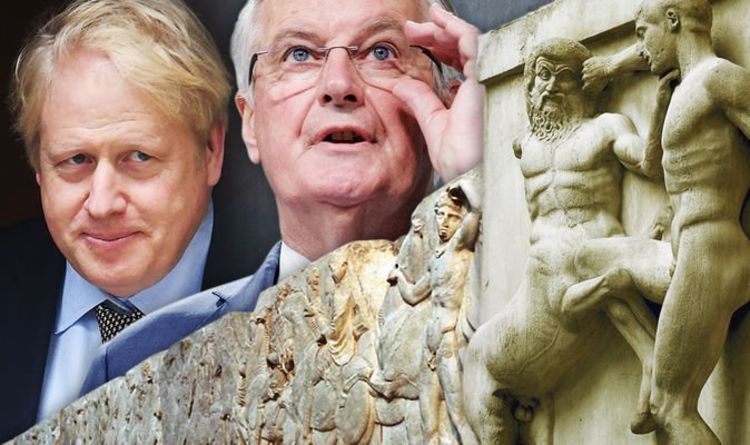 In a draft letter to the Brussels negotiator, and EU Council President Charles Michel, members of the European Parliament offered their “undeniable support to the cause of the reunification” of the disputed artefacts. The UK faces having to return the marbles, which Greece insists were stolen by Lord Elgin, a British diplomat, from the Parthenon temple in Athens over 200 years ago, as part of any free-trade agreement struck with the European Union. Mr Barnier’s negotiating mandate was hardened by European capitals to include demands for the “return and restitution” of contested cultural objects.

“The Parties should, consistently with Union rules, address issues relating to the return or restitution of unlawfully removed cultural objects to their countries of origin,” it states.

The Greek government denied the line was inserted into the Frenchman’s list of demands as part of a plot to reclaim the marbles.

But MEPs, including Stelios Kympouropoulos, from the Athen’s ruling New Democracy party, insist the trade talks with Britain represent a perfect opportunity to win back the fifth-century-BC sculptures.

In the letter, seen by Express.co.uk, they write: “Recent reports based on a leaked draft of the new EU-UK trade deal claim that a new paragraph was negotiated regarding the return of ‘unlawfully removed cultural objects’.

The memo adds Mr Barnier should respect Article 167 of the EU’s treaty, which vows to “conserve and safeguard cultural heritage of European significance”.

“We reiterate our call for the reunification of the marble, as soon as possible, and we support any claims put forward as part of the trade deal or any process initiated thereof,” the letter, signed by 15 MEPs, concluded.

The Euro MPs want to send their letter to Messrs Barnier and Michel on Friday and were attempting to recruit new signatories for their cause by email this morning.

The Elgin Marbles are currently on display at the British Museum in London.

They were originally part of a frieze on the Parthenon but were acquired by Lord Elgin in the early 19th century when Greece was ruled by the Ottoman Empire.

A Government spokesman said: “The UK’s position on the Parthenon Sculptures remains unchanged – they are the legal responsibility of the British Museum.

“That is not up for discussion as part of our trade negotiations.”