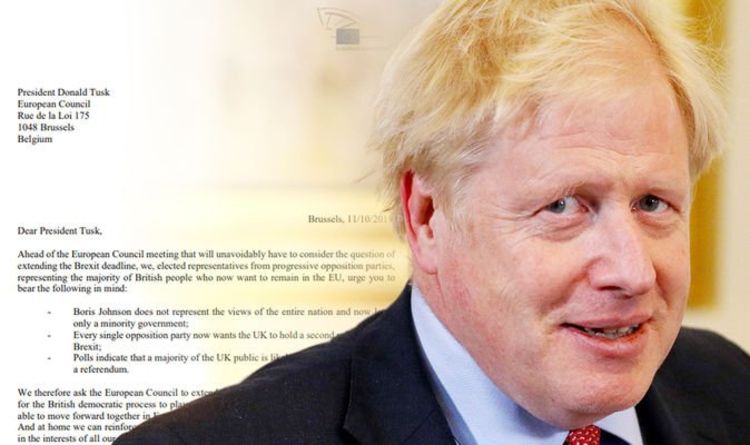 The letter asked Donald Tusk if the European Council could extend the Brexit deadline past October 31 to help rebuild “trust and cooperation” between the UK and the bloc. It also suggests the MEPs represent the majority of people who want to remain in the EU, although none of them were from the Conservative Party or Brexit Party. This comes ahead of the EU summit, which will begin tomorrow.

The letter said: “Ahead of the European Council meeting that will unavoidably have to consider the question of extending the Brexit deadline, we, elected representatives from progressive opposition parties, representing the majority of British people who now want to remain in the EU, urge you to bear the following in mind:

“Boris Johnson does not represent the views of the entire nation and now leads only a minority government.

“Every single opposition party now wants the UK to hold a second referendum on Brexit.

“Polls indicate that a majority of the UK public is likely to vote to remain in such a referendum.”

The letter is signed by Lib Dems including Phil Bennion, Jane Brophy and Judith Bunting.

Gina Dowding from the Green Party and Aileen McLeod from the SNP also added their names.

Meanwhile, Brexit talks will resume for a final day before the EU summit.

READ MORE: EU to delay Brexit until NEXT YEAR even if Boris Johnson agrees deal

The PM is expected to update his Cabinet on progress in the negotiations on Wednesday afternoon.

A Downing Street source said: “Constructive talks, worked into the night, continue to make progress, continue in the morning.”

If Mr Johnson succeeds in bringing a deal home to the UK, he will then need to get it approved by Parliament.

Liberal Democrat leader Jo Swinson also said this morning her party could vote for any deal Mr Johnson may achieve if it will be put to the people in a confirmatory referendum.

She told BBC Radio 4’s Today programme: “There’s no deal that is better than the deal we have as members of the European Union, so of course we are not going to be supportive of any deal.

“But what we will do, and what we want to happen, and what we have been arguing for for more than three years, is for whatever Brexit deal that is negotiated is put to the people.”

She asked whether that means the Lib Dems would vote for Mr Johnson’s deal if it is attached to an amendment for a second referendum.

Ms Swinson said: “We will back a referendum whether it’s on Boris Johnson’s deal, whether it’s on Theresa May’s deal, because we think it should be the public that are in charge and are having that say.”

Facebook
Twitter
Pinterest
WhatsApp
Linkedin
ReddIt
Email
Tumblr
VK
Previous articleSky TV dropped to ’lowest ever’ price but this dramatic discount ends tomorrow
Next articleWeight loss: Eating this food can help you shape up according to a professional athlete