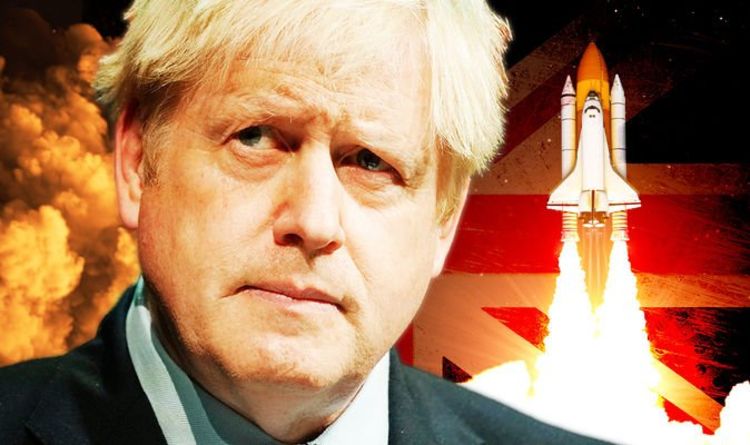 The Prime Minister came to a loggerhead with Whitehall’s head of the Civil Service over a top-secret £5billion spy satellite project. In a meeting with Mr Johnson an his closest aide Dominic Cummings, Sir Mark Sedwell branded the project “unrealistic and unaffordable” and revealed his officials were working on a cheaper alternative. A “visibly angry” Mr Johnson then put his head in his hands and berated the head of the chief mandarin.

He was met with negative comments about the space programme being months behind schedule.

The Prime Minister snapped: “Why am I only hearing about this now?”

Sir Mark replied he was “going to tell you about it after this meeting”.

Mr Johnson retorted he had already announced the project and demanded Sir Mark got it back on track.

The UK currently relies on an American satellite system for navigational guidance of Britain’s drones, missiles, ships and other espionage projects.

Britain was leading the way in an EU system called Galileo but was ousted from the project in a Brexit spat with Brussels.

The Prime Minister gave approval of the British alternative in one of his first acts in office.

He said: “Let’s get going now on our own position navigation and timing satellite and earth observation systems – UK assets orbiting in space with all the long-term strategic and commercial benefits for this country.”

It is understood officials, led by Sir Mark, want a cheaper system that would not be purely independent and sovereign.

The row comes amid claims Mr Cummings is trying to wrestle control of space policies from the Business Department.

It is understood Mr Cummings blamed them for agreeing to give the European Space Agency a further £1.8billion in funding last year.

The advisor believed the money should have been spent on the new UK-only capabilities.

He claimed: “The UK Space Agency won’t let me go into detail about the specific companies, but next year, around March time, there will be a £5billion programme announced.

THE EU’s negotiating position on Brexit is quickly unravelling, according to Brussels insiders, who fear the ongoing row is a “disaster” and plays right “into the hands of the Britsh”.

The EU still hasn’t finalised its negotiating strategy for the Brexit trade talks with the deadline less than three days away.

There is growing panic in Brussels that the EU could miss the deadline for its final negotiating strategy, which would be a “disaster” for the talks.

EU officials told the BBC’s Adam Fleming that missing the Tuesday deadline would “play right into the hands of the Brits”.

Negotiations between the UK and the EU are due to start in the first week of March.

10.00am update: Emmanuel Macron ‘not sure’ of UK-EU trade deal by end of year

French President Emmanuel Macron has said he is “not sure” a UK-EU trade deal will be struck by 31 December, the end of the Brexit transition period.

Mr Macron said negotiations starting in March will be “tense”, with fishing rights a key point of contention.

Mr Macron said at a meeting with fishermen in Paris on Saturday: “I am not sure that an agreement will be reached between now and the end of the year.

“Anyway, it is going to become more tense because the British are very hard.”

9.30am update: Brexit trade talks blasted by No10 as UK lashes out at ‘divided and distracted’ EU

Sources close to Prime Minister Boris Johnson point to the EU’s delay in publishing its negotiation mandate and last week’s chaos over its budget.

The recent suggestion by the EU that the Elgin Marbles could be part of a price of a trade deal has been dismissed out of hand.

A source close to the British negotiations said: “On the UK side, progress has been remarkably smooth, with a clear decision-making framework in place and a sense of unity among ministers.

“By contrast, the EU seems divided, distracted by other issues like marbles, instead of the important decisions on what our trading relationship will actually look like.

“The new plan is for them to approve their mandate on February 25 but it is anyone’s guess whether they will.”

EXPERTS who said it could cost £500,000 for Big Ben to ring out on the night Britain left the EU have admitted they got their sums wrong for earlier chimes.

The House of Commons Commission, responsible for Parliament maintenance, has revealed the cost for the bell to ring on New Year’s Eve and Remembrance Sunday was £14,200, half its original figure.

It had also come up with the huge figure for restoring Big Ben’s bongs for Brexit night, something that never happened.

Conservative MP Mark Francois, who was a leading campaigner for Big Ben to ring on Brexit night, said he would now take Commons estimates about the cost of restoring Parliament with a “quarry full of salt”.