Brexit outrage: How Leave voters peaked at 65 percent – but were IGNORED 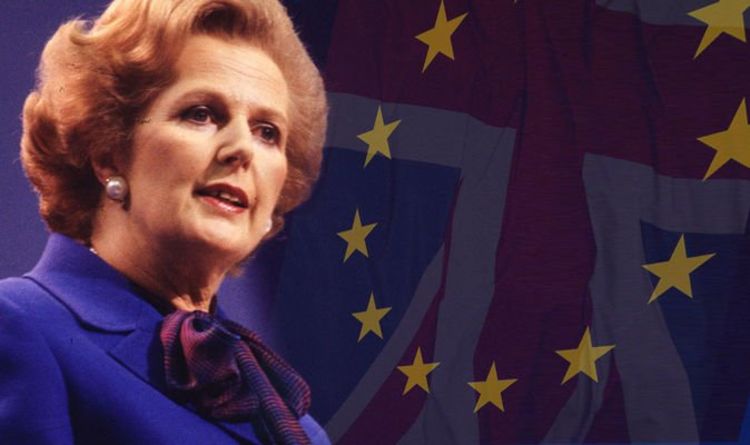 While two-thirds of the voting public favoured staying in the European Economic Community (EEC) in 1975, the relationship quickly soured. Just five years later in 1980, Mrs Thatcher’s first full year in office, opinion polls showed a huge 65 percent of people were opposed to membership, with just 26 percent in favour. While the Iron Lady may be more famous for her “No! No! No!” speech towards the end of her time as Prime Minister, in which she blasted the idea of further political integration, she did in some ways ignore the views of Eurosceptics by refusing to consider leaving the bloc in the early Eighties.

While Mrs Thatcher’s famed rebate in 1984 tipped the scales back in favour, it is worth noting that this huge majority was not considered a mandate for another referendum.

Ipsos MORI have been polling Britons on how they would vote in a referendum on membership since 1977.

During this time, there have been dramatic swings between whether pro or anti-European views have had the majority.

Their first results found that the British public seemed to regret how they voted in the 1975 referendum.

By 1978, more people wanted to leave the bloc than wanted to remain.

As the country suffered under the failing Labour government and tipped into the Winter of Discontent, their feelings grew stronger with 60 percent favouring leaving the bloc in 1979.

This peaked in 1980, but Mrs Thatcher managed to get the situation under control by securing concessions from the EEC and anti-Europe sentiment simmered.

Pro-Brexit views were in the majority until 1984 but declined until around 1991, when there was discussion of further political integration.

During the Blair government, British attitudes towards the EU fluctuated, especially in response to the perceived success – or otherwise – of the single currency.

According to Roger Mortimore, director of political analysis at Ipsos MORI, even those indicating that they wanted to Remain, often reflected a desire to stay in the Common Market but that political and monetary union were less popular.

In all the times they polled for views on the single currency, the British public rejected the idea.

In this way, these longitudinal data show the Euroscepticism is not something that has been whipped up recently, as some Europhiles would like to believe.

Instead it shows that there has always been an element of it in the British consciousness for decades.

However, it does also highlight that British attitudes are not static on the issue, but respond to developments including various crises and the ongoing push for further political integration.

Nevertheless, Brexiteers were pushed to the fringes of British politics until fairly recently with the rise of Ukip.

Nigel Farage once said that he had almost given up hope, that he was in danger of becoming the “patron saint of lost causes”, but then David Cameron promised a referendum and everything changed.