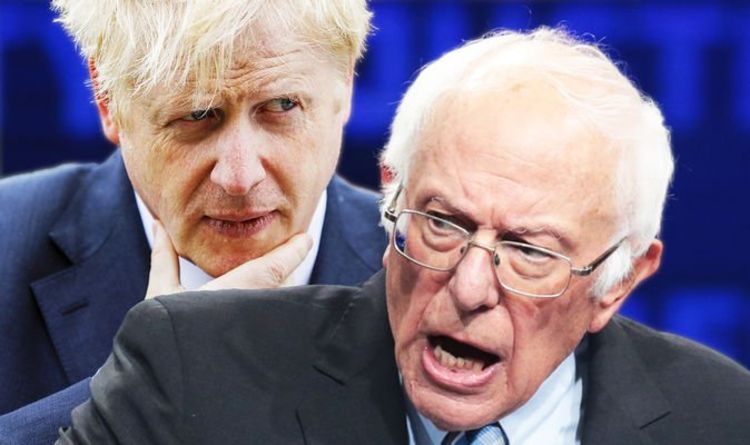 That is because – as one expert tells Express.co.uk – if Mr Sanders was to become President next year, he would only work with Mr Johnson once there is a clear agreement with the EU. Professor Scott Lucas of Birmingham University explained how the Vermont Senator’s priorities could differ from Johnson’s. He told Express.co.uk: “If Sanders was President, the UK government would have to come to the US with a resolution with the EU.

“Because what is Sanders’ priority? The reason why he didn’t like other free trade deals is because they didn’t provide enough protection for labour, and for small American companies, and instead benefitting big companies.

“He was against the EU-US trade deal because he felt standards would be lowered.”

This therefore means that if Mr Johnson wants to avoid regulatory alignment with the EU – a key aim for his Brexit deal – Mr Sanders as President would walk away from a UK trade deal.

As Professor Lucas highlights, the Democratic Party candidate has opposed numerous trade deals in the past on the grounds of protection for workers.

In 2016, the 78-year-old said: “I do not believe in unfettered free trade. I believe in fair trade which works for the middle class and working families, not just large multinational corporations.

“I was on the picket line in opposition to NAFTA. We heard people tell us how many jobs would be created.

“I didn’t believe that for a second because I understood what the function of NAFTA, CAFTA, PNTR with China, and the TPP is, it’s to say to American workers, hey, you are now competing against people in Vietnam who make 56 cents an hour minimum wage.”

NAFTA is a free trade agreement between the US and Canada, and was criticised by Mr Sanders as serving corporate interests.

He also hit out at other deals in 2015, saying: “We must end our disastrous trade policies which enable corporate America to shut down plants in this country and move to China and other low-wage countries.