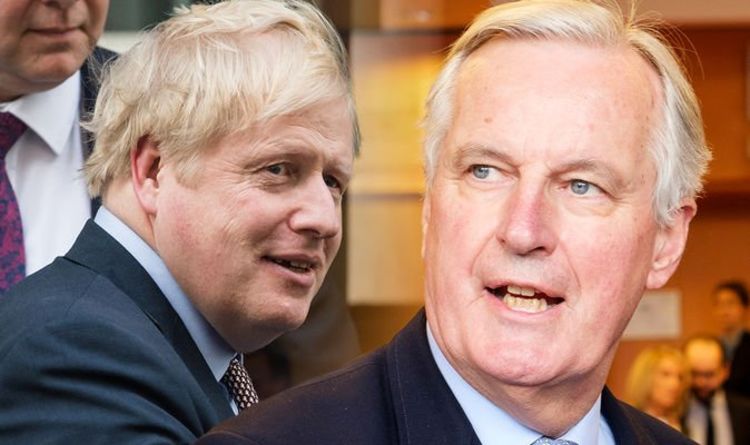 This morning, EU member states are finalising their negotiating priorities for a future trade deal with the UK. The document is expected to be approved by EU ministers for European affairs meeting in Brussels. Meanwhile, in London, Boris Johnson’s Cabinet is set to approve the British mandate, due to be published and presented to Parliament on Thursday.

Ministers are expected to reiterate their desire for a Canada-style deal with few tariffs on goods.

However, this arrangement was ruled out by the EU’s chief negotiator Michel Barnier in January.

The French politician claimed that, in order to achieve such a deal, Britain has to accept a “level playing field” on rules and standards – something Mr Johnson has pledged not to do.

The Prime Minister claims there is “no need” for a free trade deal that involves accepting EU rules on competition, subsidies, social protection or the environment.

The disagreement is a sign that Britain is on course for a significant clash with the bloc in the trade talks – which will officially start on March 3.

According to unearthed reports, though, it appears that Brussels once promised the UK the very thing it is now denying.

In 2017, senior European officials told the Financial Times that the EU was preparing to present Britain with an agreement similar to the one struck with Canada.

At the time, the deal was a “fallback” plan, as Brussels was waiting for Theresa May to take the lead in proposing a new basis for relations.

One senior European official working on Brexit told the publication the EU side was preparing to ultimately take the initiative in the form of a blueprint based on the EU-Canada trade deal.

The official said: “If the Commission sees that it’s not getting any clarity on this then it is preparing a ‘take it or leave it’ proposal.

“This would be in case everything goes pear-shaped.”

Moreover, in 2019, former EU Council President Donald Tusk did claim that “from the very beginning, the EU offer has been not just a Canada deal, but a Canada+++ deal, much further-reaching on trade, on internal security and on foreign policy cooperation”.

The “plus” came from linked agreements on fisheries, aviation, security and foreign policy coordination, which are not included in the Canada-EU agreement.

However, it is not clear whether the former EU Council President also wanted the UK to sign up to “specific and effective” guarantees.

Lord David Owen, former Foreign Secretary and co-founder of the SDP, recently told Express.co.uk just how significant the change in the EU position is.

He said: “Firstly, the spokesman is Michel Barnier, but is it Barnier himself or is he under instructions?

“If he is under instructions, the instructions are coming from Emmanuel Macron, who has told him he does not want a long deal and he is not prepared to live with a Canada settlement.”

He noted: “It may be others, though. It may be Barnier reading the view of the European Parliament.

“But under Donald Tusk, the former President of the EU Council, the British people and the British Government were told on a number of occasions that a Canada-style deal was acceptable.

ByThe tongue-in-cheek campaign to get Swale excluded from the country was launched by Joe Daniel who claims "Swexit" is essential so people can "go...
Read more
U.K.

ByHundreds of demonstrators descended on Central London on Saturday afternoon, chanting "freedom" and leaving bystanders in utter disbelief. Protesters, many of whom weren't wearing...
Read more