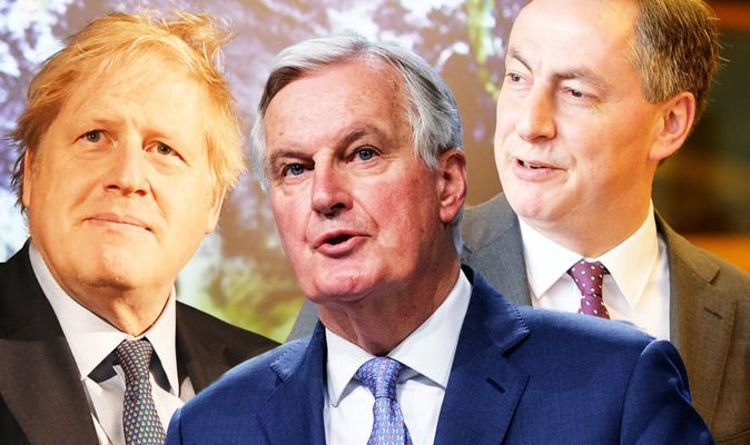 Express.co.uk has learnt members of the European Parliament will issue the warning as part of a resolution due to be voted on next Wednesday in Strasbourg. They will insist trade talks could be “stalled” if Mr Johnson does not fulfill his obligations under the UK’s EU Withdrawal Agreement. Under the deal, the Government must introduce a number of customs checks between Great Britain and Northern Ireland after the Brexit transition period expires at the end of the year.

A senior parliamentary source said: “Should there be hiccups in the execution of the Withdrawal Agreement that would impact the future talks, that’s quite obvious.”

The plan was discussed in the first meeting of the EU Parliament’s UK Coordination Group, formally known as the Brexit Steering Group.

Its new chairman, German MEP David McAllister, said they had drafted a resolution in just 48 hours.

He has replaced Guy Verhofstadt as the EU Parliament’s Brexit point man.

Senior MEPs, who lead the political blocs in the institution, will vote on its terms this morning.

After the meeting, Mr McAllister told reporters: “We all know that thanks to the British decision to definitely not extend the transition period we don’t have much time left. We need to prioritise and let’s see how far we can get. Our priorities as an EP are trade on the one hand, security cooperation on the other.”

He added: “We need a whole governance structure, but in our resolution you will see all political fields covered – fisheries, energy, transport, science, environment. We’re following every speech of UK Prime Minister and Government officials. Let’s get the negotiations started and see how it goes.”

Michel Barnier, the EU’s chief negotiator, briefed the group, promising to keep them informed throughout the post-Brexit trade talks.

The Frenchman vowed to fight for the bloc’s interests as he hammers out an 11-month deal with Britain.

MUST READ: Lord David Owen calls for the abolition of ‘ABSURD’ House of Lords

It reads:”The negotiations of the envisaged partnership should be premised on the effective implementation of the Withdrawal Agreement and of its three Protocols.

“In this context, the envisaged partnership should continue to protect the Good Friday or Belfast Agreement reached on April 10, 1998 by the United Kingdom Government, the Irish Government and the other participants in the multiparty negotiations in all its parts, in recognition of the fact that the peace process in Northern Ireland will remain of paramount importance to the peace, stability and reconciliation on the island of Ireland.”

ByInternational Trade Secretary Liz Truss signed a free trade agreement with Japan worth £15.2bn, hailing it as the dawn of a new era of...
Read more
U.K.

ByThe EU and UK embarked on an intensified final phase of Brexit talks at the end of this week after Britain agreed to lift...
Read more
U.K.

ByMs Sturgeon said: "When England published their the chief medical officer in England at the time said he thought the top level was...
Read more