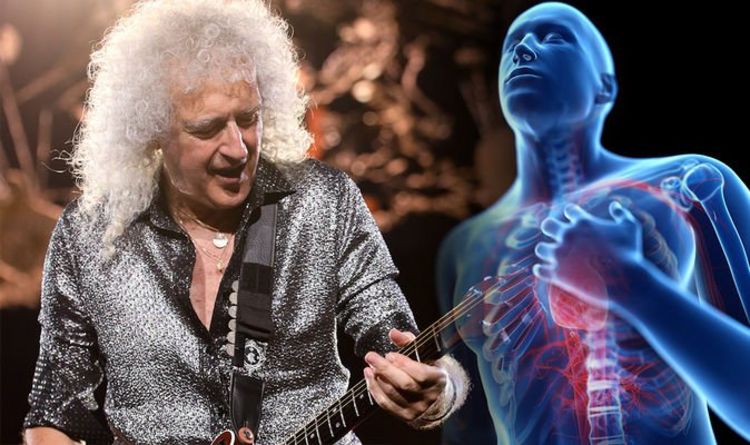 But the musician revealed he had been “very near death” without realising, as it was later discovered he had three congested arteries.

Speaking on Instagram he said: “In the middle of the whole saga of the painful backside, I had a small heart attack. I say small, it’s not something that did me any harm.

“It was about 40 minutes of pain in the chest and tightness. It’s that feeling in the arms and sweating.”

Brian’s doctor drove him to hospital where he underwent an angiogram, which is a type of X-ray used to examine blood vessels.

He continued: “I turned out to have three arteries which were congested and in danger of blocking the blood to my heart.”

Detailing his ordeal, Brian said: “When I came around, it was as if nothing had happened.

“It’s an incredible operation done by the right skilful person and I thank them from the bottom of my heart”.

Brian encouraged anyone over the age of 60 to get an angiogram.

He said: “Nothing could tell me I was about to get in real, real trouble.

“I could have died from that. Anyway, I didn’t die, I came out.”

He added: “What seems to be a very healthy heart may not be.”

“It’s the combination of symptoms that’s important in determining whether a person is having a heart attack and not the severity of chest pain.

A heart attack is a medical emergency, so if you suspect yourself or someone else is having one you should call 999 and ask for an ambulance.

The NHS warns a lack of blood to the heart may seriously damage the heart muscle and can be life-threatening.

While waiting for an ambulance it may help to chew and then swallow a tablet of aspirin (ideally 300mg), as long as the person having a heart attack is not allergic to aspirin.

The health body adds: “Aspirin helps to thin the blood and improves blood flow to the heart.”

ByWith many other health risks, its easy to forget about an issue until it is too late. Many are unaware of the importance of...
Read more

ByHigh blood pressure affects at least one in three adults in the UK yet many people have it without realising. That's because there are...
Read more