Brian May: Queen guitarist says 'show must go on' as... 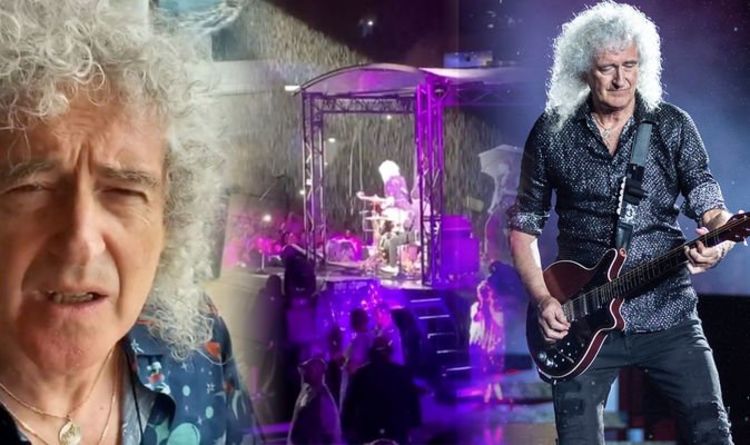 Brian May made headlines a few days ago after a minor altercation with a cameraman after landing in Australia. However, he put the drama behind him for Queen + Adam Lambert’s concert in Brisbane the night before last. It’s been a trying week for the guitar legend, though, as the band were faced with extreme whether conditions for their outdoor show at the Suncorp Stadium.

Sharing a video of the gig with his 2.2 million Instagram followers, May said it was “probably the wettest gig we ever played”.

“All the weather forecasts — even on the day — were completely, utterly wrong,” he said.

The Queen star explained how the torrential rain, clearly visible I the footage, “changes everything” during a concert.

“Just plain endurance becomes a big part of the evening,” he continued. “But we WERE prepared to a degree. And somehow the sharing of this insane occasion breeds a strong feeling of brother and sisterhood!”

READ MORE: BRIAN MAY ‘BRUISED AND DISRESPECTED’ IN AUSTRALIA

“And adding in a strong sense of humour the night became very special,” he said, going on to thank fans for their perseverance despite the weather.

“I don’t think one person relinquished their post,” the musician praised, adding: “And yes I did play my original Red Special tonight — I would never play a gig without her.

“And yes she and I both got very wet — and yes — it’s not good for either of us!

“But – the Show Must Go On — and it was worth it to see those happy faces,” May concluded.

The video showed May rocking out on stage, playing an epic guitar solo in Crazy Little Thing Called Love, accompanied by his Queen bandmate Roger Taylor on the drums and frontman Adam Lambert, who currently performs with the group, singing the vocal parts previously made famous by the late, great Freddie Mercury.

Eventually, the cameraman put down the film camera but began to film on his phone, at which point May can be heard saying: “You’re so clever, aren’t you? What a parasite you are.”

Footage shows him swiping at the camera, curse words being thrown about and then his security urging him to leave the situation alone.

On Instagram, May wrote: “Now, obviously I’m not a novice at this… I’ve interacted with literally thousands of news reporters, photographers and cameramen over the last 50 years.

“I’m not exactly known for being aggressive, even in the face of provocation, but this guy caught me unawares – one of the rudest and most disrespectful video cameramen I’ve ever encountered.”