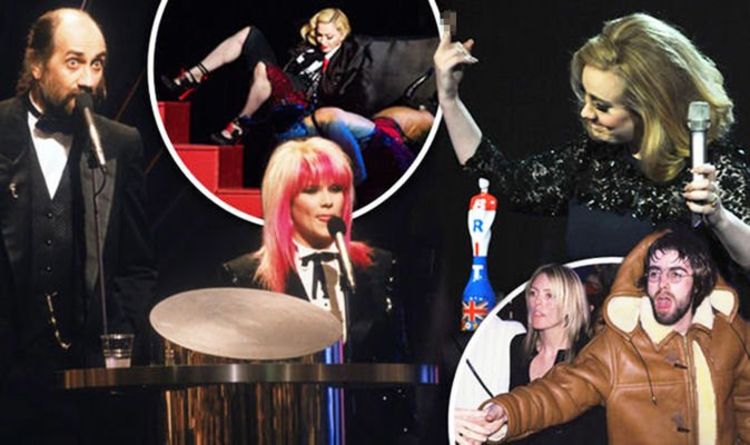 Five years ago the Queen on Pop suffered a shocking fall live on stage. Like a trooper, Madonna picked herself back up and got on with the show. rather like she is doing (with a sizeable number of cancellations) during her current residency in London at the Palladium. The show must always go on, even if sometimes those on stage might wish for a sudden nationwide power cut to spare their embarrassment. Others, of course, revel in creating a little mayhem. here are our favourite crazy and cringey BRITS moments.

The Gallaghers deserve an entire countdown to themselves but this moment perfectly sums up Liam.

The bolshy star collected a special award for Best Album of the Last 30 Years for Oasis’ (What’s the Story) Morning Glory? In the process, he thanked all of his bandmates apart from his brother Noel, swaggered away to give the award to a fan and hurled his microphone into the audience.

Host Peter Kay’s summed up what everyone was thinking when he declared: “What a k–bhead.”

Another BRITS controversy hit the headlines when Pulp lead singer stormed the stage during Michael Jackson’s performance of Earth Song.

Cocker ran across a packed stage full of dancing children and wiggled his behind at the King of Pop.

“My actions were a form of protest at the way Michael Jackson sees himself as some kind of Christlike figure with the power of healing,” Cocker said afterwards.

Following complaints from some of the kids, Cocker was detained and interviewed by police on suspicion of assault, but was released without charge.

The perfectionist pop star took a huge tumble backwards down the stairs when a wardrobe malfunction didn’t release her cloak and she was yanked off-balance.

Conspiracy theories insist she did it for the attention but a close look at her face shows her upset and discomfort. Ultimately, the shaken superstar received enormous praise for the way she picked herself up and carried on with the show.

Adele is the absolute opposite of a diva but even her legendary good spirits were sorely tested by foolish TV producers.

2012 was the year of her grand triumph after her second album 21 had conquered the world. Surely, she was entitled to bask in her rewards? Unfortunately, the show was running long and James Corden was told to cut her off during her acceptance speech for Best British Album.

The crowd booed, a furious Adele gave the middle finger to the corporate suits in the audience and we loved her even more than before.

A year later she accepted Best British Song for Skyfall via video. Host James Corden attempted a drawn-out joke about the events of the previous year which fell even flatter than the original debacle.

Facebook
Twitter
Pinterest
WhatsApp
Linkedin
ReddIt
Email
Tumblr
VK
Previous articleKellie Bright: ‘He had to spend a few nights in hospital’ Star’s health worry for her baby
Next articleBees crisis: THIS is what the world loses if bumblebees die out