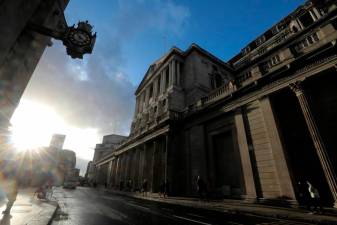 Britain’s economy has gone into lockdown during the coronavirus crisis and a recession is predicted, making it difficult for companies to assess earnings.

The Bank of England’s Prudential Regulation Authority (PRA), the Financial Conduct Authority and auditing regulator the Financial Reporting Council said the reduction in activity could be “sharp and large”. But activity was likely to rebound sharply once social distancing measures are lifted, they forecast.

In the meantime, the measures would ensure information continues to flow to investors and the capital market keeps functioning, the three watchdogs said in a joint statement.

Bank of England Deputy Governor and PRA Chief Executive Sam Woods said in a letter to banks that “all aspects” of the measures put forward will need “urgent attention” as they finalise March/April year-end statements and first quarter reports.

“These measures are aimed at ensuring that banks are able to continue to lend to households and businesses, support the real economy, and provide robust and consistent market disclosures,“ he wrote.

Under a global accounting rule known as IFRS 9, banks are required to provision for losses on loans to businesses as soon as credit risks increase, raising fears that provisioning will balloon given large parts of the economy are at a standstill.

Woods said it was critical banks take “well-balanced” decisions that also bear in mind actions already taken by government to help borrowers such as repayment holidays.

“We are thinking about what further steps could be taken to enhance the robustness of, and bring greater consistency in, the application of IFRS 9,“ Woods said.

There was a need to “tread carefully” and think through things afresh and in detail, he added. “That will take time.”

The FRC measures include postponing by up to two years a requirement on companies to hold public tenders every 10 years for an auditor, a time-consuming and costly exercise.

“It addresses the difficulties companies currently face in making forward-looking judgements in their financial statements: for example, in strategic reports and viability statements, with a focus on appropriate disclosure of material uncertainties and going concern issues,“ the FRC said.

The FCA said it will allow listed companies which need extra time an extra two months – to six months after the end of their financial year – to complete their audited financial statements.

The FCA also said it would not suspend a company’s listing if it published financial statements within six months of their year-end.

“We urge market participants not to draw undue adverse inferences when companies make use of the extra time our temporary relief gives them. For a great many companies it will be a sensible decision to make in unprecedented times,“ the FCA said. -Reuters