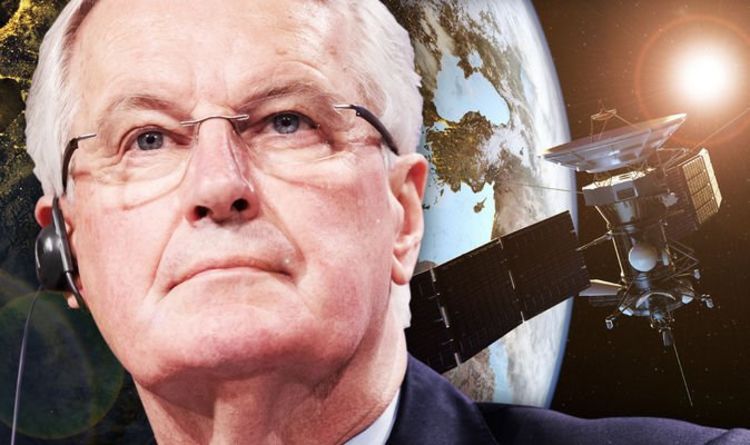 Despite designing and funding swathes of the bloc’s satellite navigation project, the Government will have to surrender access to its own system in order to guarantee access to the so-called Public Regulated Service under a future relationship agreement drawn up by Michel Barnier. Britain contributed around £1.2 billion to the creation of the bloc’s £10 billion satellite navigation system, which is expected to be fully operational by 2026. A feasibility study was launched in 2018 after it emerged the UK would be shut out of the military and defence aspects of Galileo after Brexit.

The UK Space Agency and Ministry of Defence have been working together on a potential design to rival the EU’s system ever since.

Brussels’ own system aims to have 24 satellites in orbit to provide an operate navigation service as well as a highly encrypted platform for emergency services and military use.

While the bloc is willing to allow Britain to negotiate access to the more sensitive elements of Galileo, this access could be revoked as soon as the country’s own satellite system is operational.

According to a draft agreement due to be negotiated next week, Mr Barnier wants to ensure any access is conditional “unless and until the United Kingdom grants the Union access to its envisaged Global Navigation Satellite System”.

The document adds: “Access by the United Kingdom to the Public Regulated Service shall be conditional upon the United Kingdom’s participation in the non-security related activities of the Union programmes in the area of Space.”

EU sources have suggested the bloc will revisit any short-term access deals, which could include a number of guillotine clauses, once Britain’s navigation system is operational.

One said: “Member states have insisted on a conditionality that ensures reciprocal access to secure parts of our system is granted provided the UK opens up access to its envisaged system.

“We’ll revisit the agreement when the UK system is operational.”

Mr Barnier sent out the bloc’s proposed trade and security deal with the UK to member states before the next round of negotiations, which were due to take place next week.

The deadly coronavirus outbreak has prompted UK and EU negotiators to their cancel original plans to have 200 officials sit down in London.

Mr Barnier, the EU’s chief negotiator, is today due to brief European capitals on his new plans.

One EU diplomat described the move as a “take-it-or-leave-it” offer to Britain after an inconclusive first round of negotiations last week.

Boris Johnson’s lead negotiator, David Frost, has announced plans to table his own draft legal text when he next meets his EU counterpart.