Britain to publish ALL documents to show EU threats as... 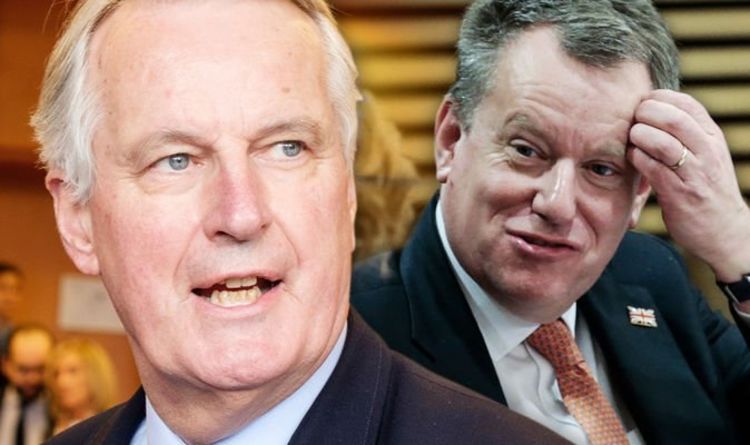 Britain and Brussels appeared far apart on agreeing on a future post-Brexit trade arrangement after the UK’s chief negotiator said “very little” progress had been made in the latest round of talks. David Frost insisted the major obstacle to agreement was the EU’s insistence on including a set of “novel and unbalanced proposals” regarding a level playing field on standards. Mr Frost also said it is “hard to understand why the EU insists on an ideological approach” to negotiations on fishing rights. The British Government will now publish all documents related to the talks.

Commenting on the latest Brexit news on Sky News, Europe correspondent Adam Parsons said: “David Frost was very downbeat today about any progress that has been made.

“The British side say they are going to publish all of their documents now, the Europeans have already done that.

“They are frankly still arguing about the arguments.

“In terms of actual concrete progress towards a deal, very little seems to have been achieved.

“So that does raise the spectre of the UK leaving at the end of this year with no trading agreement for next year and the years beyond.”

The EU’s chief negotiator Michel Barnier insisted that the UK could “not have the best of both worlds” in a deal.

Following the conclusion of the third negotiating round, Mr Frost said: “I regret however that we made very little progress towards agreement on the most significant outstanding issues between us.

“It is very clear that a standard Comprehensive Free Trade Agreement, with other key agreements on issues like law enforcement, civil nuclear, and aviation alongside, all in line with the Political Declaration, could be agreed without major difficulties in the time available.

“The major obstacle to this is the EU’s insistence on including a set of novel and unbalanced proposals on the so-called ‘level playing field’ which would bind this country to EU law or standards, or determine our domestic legal regimes, in a way that is unprecedented in Free Trade Agreements and not envisaged in the Political Declaration.

“As soon as the EU recognises that we will not conclude an agreement on that basis, we will be able to make progress.”

A senior UK official close to the negotiations said the talks had been “a little bit tetchy at times” and “disruptive”, but had “gone well in terms of process”.

He said: “Although we have had useful discussions on fisheries on the basis of our draft legal text, the EU continues to insist on fisheries arrangements and access to UK fishing waters in a way that is incompatible with our future status as an independent coastal state.

“We are fully committed to agreeing fishing provisions in line with the Political Declaration, but we cannot agree arrangements that are manifestly unbalanced and against the interests of the UK fishing industry.