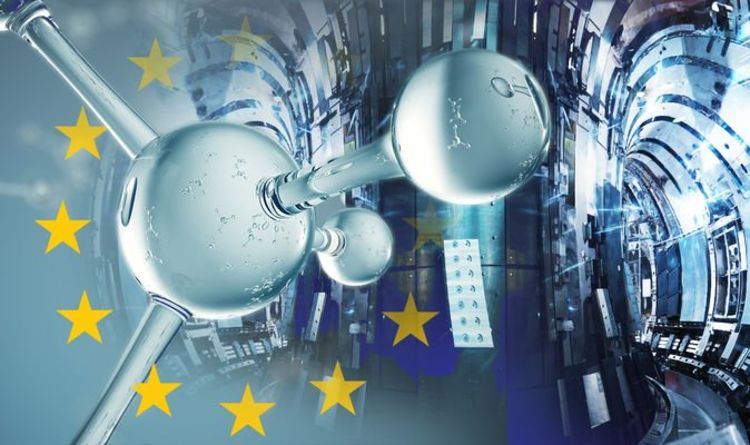 British scientists based at the United Kingdom Atomic Energy Authority’s Culham Centre for Fusion Energy (CCFE), near Abingdon in Oxfordshire, host the JET machine on behalf of its European research partners. The experiment is paving the way for ITER, a bigger, tokamak nuclear fusion reactor project based in the south of France aimed at demonstrating fusion on the scale of commercial power production, yielding almost limitless amounts of energy in the process. As reported on Express.co.uk, an Australian startup company called HB11 claims to have perfected a method which would revolutionise current nuclear fusion technology with the prize of creating atomic energy without any of the risks associated with traditional nuclear power stations – potentially stealing a march on the work being undertaken at Culham.

And it has now emerged Britain’s decision to quit the bloc could potentially throw a spanner in the works – given JET is partially funded by EU cash.

JET is currently the only experiment which can operate with the deuterium-tritium fuel mix which will be used for commercial fusion power.

Since it began operating in 1983, researchers have made major advances in the science and engineering of fusion.

A UKAEA spokesman said JET was planning to perform a major run of tests early next year, during which scientists expect to “sustain significant levels of fusion power”.

The experiments on JET are vital for the international ITER fusion project, which involves 35 international partners including China and Russia, and which is scheduled to come online in 2025.

However, an update carried on ITER’s website on January 31 –  the day the UK quit the EU – states: “The United Kingdom has formally withdrawn from the European Union and Euratom but has expressed strong interest in continuing to participate in the ITER Project.

Paragraph 20 of the Other Agreements section of the UK’s Negotiation mandate published last week prior to the start of trade talks, states: “The UK will consider a relationship in line with non-EU Member State participation with the following programmes: Horizon Europe, Euratom Research and Training, and Copernicus.”

Currently, the UKAEA’s annual funding totals £180 million, which comprises £120 million of UK funding, from the Government as well as various other sources, £60 million from the EU, mostly to cover the running of JET.

Separately, but also at Culham, UKAEA is designing a more compact fusion reactor design, with the new MAST Upgrade machine due to come online up this summer.

Meanwhile the UK Government has also provided £220M to develop it into a conceptual design for a UK fusion powerplant – STEP – capable of putting fusion electricity onto the grid by 2040.

The UKAEA spokesman said: “Our funding for JET is guaranteed until the end of this year and discussions are ongoing about a longer term solution.”

Nevertheless, he admitted the onus is on the UK’s Brexit negotiator David Frost and his team to thrash out an agreement which enables the UK to continue to be involved with Euratom research projects, and therefore receive the necessary funding.