British couple trapped on cruise ship test positive for coronavirus 'This is a set up!' 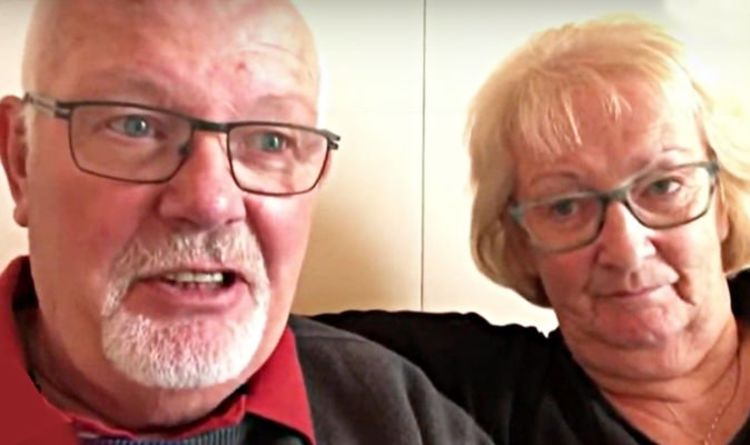 Mr Abel and wife Sally, who are on the cruise to celebrate their anniversary, are among the 74 Britons on the ship, with the US already having chartered two two planes and repatriated 340 of its citizens, and now tests have shown they do have the bug. Four Britons with confirmed coronavirus are currently in hospital in Japan, according to the latest official figures, after the ship was quarantined on February 3. Mr Abel, who has been critical of conditions on board the cruise ship, and who is regularly uploading clips to Facebook, posted: “There is going to be a time of quiet.

Mr Abel, who had previously said he believed they would test negative, added: “We have been proved positive and leaving for hospital soon. Blessings all.”

Mr Abel, who has spoken of his concern that he and his wife could end up getting separated, later venting his frustration by adding: “Frankly i think this is a setup! We are NOT being taken to a hospital but a hostel.

“That’s where partners are sent waiting out there quarantine.”

“No phone, no wi-fi and no medical facilities. I really am smelling a very big rat here! Waiting for the transfer now..”

In total, 450 people have so far tested positive, while Sir Richard Branson has said Virgin Atlantic was “in discussions” with the Government over whether he could help those stranded.

He responded via Twitter to an appeal from the couple, who asked the British businessman and philanthropist to charter a special plane, and who aired their concerns earlier this month on Good Morning Britain.

The couple’s son Steve Abel renewed appeals for the Government to help his parents, who he fears may become separated in Japan.

In his latest video uploaded yesterday, prior to learning the news, he complained about the conditions onboard, admitting: “It’s all getting to us. It’s the not knowing factor. Mentally it’s all taking its toll.”

In an interview with Good Morning Britain last week, Mr Abel admitted: “It doesn’t matter how long you’ve been married, couples have been separated.

“Elderly couples, one I understand in their eighties, have been split up. It’s very, very worrying for those on board.”

His wife Sally added: ‘We’ve been together 50 years and the thought of one of us being positive and one not and being split is very scary.”

Asked via Twitter to help the couple, Mr Branson replied: “@VirginAtlantic does not fly to Japan, but we are in discussions with the UK government and seeing if there is anything we can do to help.”

Meanwhile the Foreign Office has said it is “working to organised” a flight back to the UK for British nationals “as soon as possible”.

A statement explained: “Our staff are contacting British nationals on board to make the necessary arrangements.

“We urge all those who have not yet responded to get in touch immediately.”

A subsequent tweet from the FCO’s official account added: “Our staff are contacting British nationals on board #DiamondPrincess to make the necessary arrangements. We urge all those who have not yet responded to get in touch immediately.”

Bystaronline@reachplc.com (Sofie Jackson) Footage of a large male great white shark circling a spearfisher has made waves on social media. The video was filmed by Jason...
Read more
World

ByGabby Orr “In this case, today is the best day that we’ve ever had... We’re doing really well. I just want to project that to...
Read more