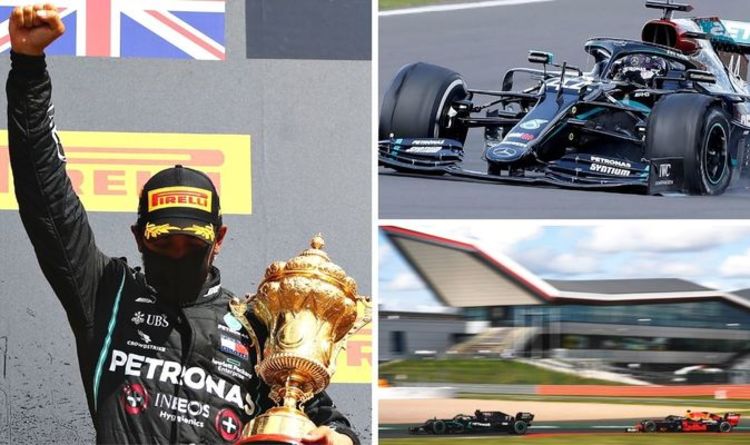 2:07pm: What a blow for Racing Point’s aspirations this season. This could have been a great race to pick up some valuable constructors’ points and now their chances have been halved.

2.05pm: We’re now just five minutes from lights out at Silverstone! Remember, Hamilton is going for a seventh win there today. Victory would put him within four of Michael Schumacher’s record haul of 91.

2.02pm: Racing Point have run out of time to fix Hulkenberg’s car and he’s out of the British Grand Prix before it began. He’s been through a rollercoaster of emotions this week.

1.59pm: Hulkenberg looks set to miss out on competing in today’s race. What a shame for the German, who was due to start in 13th.

1.57pm: Another poignant moment here as a Spitfire flies over Silverstone in recognition of the NHS, moments after the rendition of the national anthem.

1.55pm: Here’s your 15-minute warning! Get that cup of tea sorted and get comfy for today’s race.

1.53pm: Every driver pledges to play their part in the fight against racism. Hamilton leads most of the grid in taking a knee on the track.

1.50pm: The drivers are gearing up to take a stand against discrimination on the grid. The show of solidarity will be followed by a Spitfire flyover to honour the NHS.

1.47pm: Nightmare for Hulkenberg. He’s going to have to start from the pits if Racing Point can get his car started. He’s missed the cut-off to make it to the grid.

1.45pm: Hulkenberg appears to have a problem here with his RP20. Fingers crossed the Racing Point mechanics and engineers can get to the bottom of that.

1.44pm: We’re less than half an hour away from the start of this year’s British Grand Prix! Who are you backing to win today?

1.37pm: Norris will be desperate to make his mark at his home Grand Prix but he thinks McLaren are in for a tricky race today. “I think it’s going to be a tough race for us,” said Norris. “The Racing Point looks extremely quick, much quicker than us.”

Norris is currently fourth in the F1 standings, 11 points and four places better off than team-mate Sainz.

1.32pm: The cars are out of the garages as they make their way to the grid. Let’s hope Verstappen doesn’t suffer a repeat of last month’s mishap in Hungary! Credit to those Red Bull mechanics. They worked wonders following the 22-year-old’s crash into the barriers.

1.30pm: Mercedes set the pace in qualifying and their W11s look nigh-on unbeatable this season. Technical expert Karun Chandhok gave his verdict on how the 2020 car respresents a step up from last year’s W10 earlier this week.

“If you look at the lap-time gain, I think in Hungary it was about three tenths [from] last year to this year for Mercedes,” Chandhok told Express Sport on Tuesday. “Red Bull stayed the same and, obviously, Ferrari’s gone backwards.

“But it seems to be medium-slow-speed [corners] that this year’s car seems to be better. They’ve not gained a huge amount in the high speed.

“In fact, when you look at [Sergio] Perez and [Lance] Stroll in high-speed corners, on the GPS you could see in Hungary Stroll was not far away from the Mercs. In fact on some of them of the corners he was quicker than the Mercs, at Turn Four for example. It seems to be medium-slow-speed [corners].”

1.25pm: Renault’s Ricciardo starts eighth today and yesterday said he was pleased to have booked a place on the fourth row at Silverstone. “I’m happy with eighth place today, especially in quite tricky conditions,” Ricciardo said. “It was a clean lap, no mistakes, nothing too spectacular, but good enough for eighth and just short of seventh.

“It was pretty close there with a few of us within half a second of each other. We’ve been in and around the top 10 all weekend, so we can be pleased with today’s performance.

“Tomorrow’s race will be interesting, especially in the battle for sixth or maybe fifth position. We’re starting on the softs, as are most people around us, so we’ll see what we can do. Taking home good points is the target.”

1.20pm: Hamilton and co. are set to make a united stand against racism ahead of this afternoon’s British Grand Prix. The F1 champion demanded senior figures do more to give a platform to calls for change following last month’s race in Hungary.

And, yesterday, it was confirmed there will be a protest against racism and all forms of discrimination before today’s race gets underway. A statement from the FIA said: “The FIA, Formula 1, Teams and Drivers stand united as a sport in the fight to end racism and full support equality, inclusivity and equal opportunity for all.

“The FIA supports any form of individual expression in accordance with the fundamental principles of its Statutes, and as a mark of respect each driver, as an individual, may choose to mark this moment with their own gesture.”

1.15pm: Leclerc might be starting in fourth today but Ferrari chairman John Elkann has written off the team’s hopes of winning races until 2022. So, how will the Monegasque by feeling about that assessment? Martin Brundle offered us his take earlier this week.

“He’s going to be very disappointed, because it all looked so glorious last year,” Brundle told Express Sport. “Quite clearly they were pushing the spirit of the regulations in quite a forceful way.

“I think with the way it’s now structured and compressed, the end of this season almost becomes the beginning of next season. The cars are pretty static. They’ve got a limit of tokens to improve the car. It’s fair to say, whatever you’re running now, you’ll be running next year, by and large. That doesn’t bode well.

“All the Ferrari-engine runners are back down the road a second a lap, with clearly less power. That’s another one that makes my heart sink. We need Ferrari in there but in there in way that’s within the regulations.”

1.10pm: Racing Point stand-in Hulkenberg has got the backing of Bottas as he gets set to compete in a Grand Prix for the first time since last November. “I’m sure he will be sore and, he’s probably not been prepared, physically, to drive a Formula 1 like we all did for the first race,” said Bottas.

“But I think he’s done really good, I think it’s a big challenge for him, with such short notice, he was setting some good lap times but obviously big experience from the past. I hope he has a good race.”

1.05pm: The British Grand Prix goes ahead in front of empty grandstands this year due to the impact of the coronavirus pandemic. 1995 winner Johnny Herbert admits it will make for an unusual experience but he can’t see it damaging the on-track spectacle.

“What’s the word? Different,” Herbert told Express Sport. “When I was in Hungary, the only time I noticed there being no fans around was actually when there was the build-up on the grid itself because, when you looked up into the grandstand, it was empty.

“But the rest of it all works. So for F1 drivers in the bubble, nothing has changed. It’s just a little bit different where Martin [Brundle] would normally go through the grid and the flag-waving of Lando or Lewis or whoever it may be and the driver parade as well.

“But overall the racing will be the racing that we all love to watch. I know everyone’s going to be sitting at home, but I think the entertainment will still always be there. You just haven’t quite got that live element. We’ve just all got to realise it’s a – hopefully – short time before we can get back to having fans in football stadiums and, of course, at F1.”