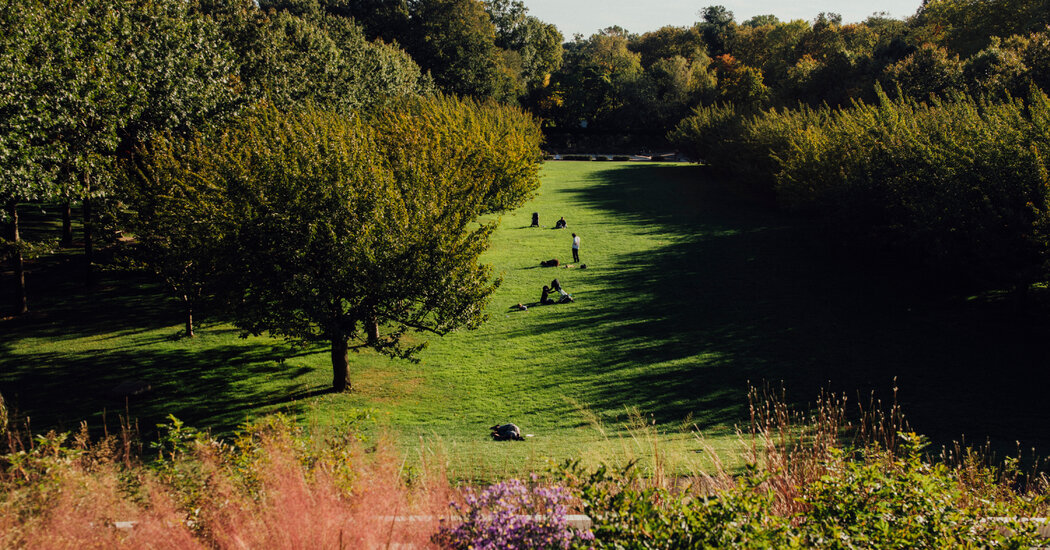 Only a skeleton staff at the Brooklyn Botanic Garden witnessed the blizzard of cherry blossoms scattered by spring breezes during the pandemic shutdown. Delicate blooms of wisteria tumbled over pergolas and plump roses unfurled with no appreciative fans to say “Oooh.”

The garden reopened in August for a limited daily number of socially distanced visitors. Now, as fall’s vibrant, showy display begins, meadow and woodland gardens completed at last winter’s onset are finally coming into their own. They are the culmination of a yearslong evolution, as the garden turns over a new leaf with the selection in September of Adrian Benepe, a former commissioner of the New York City Department of Parks and Recreation, as the new president and chief executive.

Botanical gardens have long represented an ideal of nature civilized, clipped and classified. The Brooklyn Botanic Garden hasn’t discarded taxonomic collecting or spectacular floral displays but has steadily brought more of an ecological ethos to its intimate 52 acres. The new plant groupings are comparatively disorderly, host insects and birds, and change constantly with flowers, seed pods, and leaf colors constantly popping and fading.

A long neglected 1.25-acre slope has become the Robert W. Wilson Overlook. It now hosts a sinuous path lined by white concrete retaining walls. It zigzags up amid a maturing meadow in what look like calligraphic brush strokes.

The slope was produced from excavations for the adjacent Brooklyn Museum early in the 20th century. The two glass pavilions that form the Washington Avenue entrance and visitor center had been wedged into the slope in 2012, designed by the architects Marion Weiss and Michael Manfredi. In designing the overlook, the architects echoed the waving grass roofs of the pavilions across the garden. The overlook unites upper-level attractions that wrap the museum with the core of the garden that stretches southward.

The path also eases the slope’s three-story drop for disabled visitors with a ramp so gentle that no confining railings are needed. The serpentine 680-foot-long walkway urges close contemplation as it rises a gentle 26 feet. “The garden slows you down,” Ms. Weiss said.

Textures and color are subtly enhanced in this meadow. “Grasses are prominent,” explained Tobias Wolf, the overlook’s landscape architect. Tiny intertwined flowers, leaves and stems hug the soil, including wild strawberries flopping over the top of retaining walls. Mr. Wolf likened the planting idea to “very fine threads woven together,” creating, in effect, small ecological habitats. “Even in winter there is an architecture of interlocking plants stems and seedpods,” he said.

Crape myrtles soar like totems out of the layers of low plantings, their summer firecracker blooms finished and their leaves turning rust red. The overlook adds 12 new varieties to its small collection. They have gained in popularity as climate change has extended their range northward.

The Botanic Garden opened in 1911 as a plant collection assembled for appreciation and scientific study, and the new myrtle varieties continue that mission. At the same time, they frame vistas from resting places along the path to such iconic destinations as the Cherry Esplanade and the Cranston Rose Garden: formal set pieces spread out below that echo the Brooklyn Museum’s Beaux-Arts splendor, now hemmed in by wilder, shaggy clouds of vegetation in contrasting textures and hues.

Nowhere is this more evident than in the Elizabeth Scholtz Woodland Garden, which rescues an ignored corner of the Botanic Garden and remakes it as an intensified version of a Northeastern forest edge.

Using the swirling paths found in Brooklyn Bridge Park and his other prominent works, the landscape architect Michael Van Valkenburgh created a richly varied understory of shade-loving plants. The feeling is familiar yet foreign, since the plantings, as at the overlook, mix the native with the cultivated. Elegant Asian conifers spread their lushly needled branches alongside youthful American hardwoods. Plantings are dense and the spaces intimate, opening to short vistas, including the dome of the museum.

Historically, botanical gardens were set up to “move you from one tableau to the next,” Mr. Van Valkenburgh said. “What we’re doing is like rehanging a museum collection,” in the process enriching the specimen displays and blurring the borders between them. “We find the notion of the botanic garden pretty forgiving,” he added. “You can find what speaks to you.”

What at first appears to be a roofless ruin seen through a scrim of lindens is a walled patio designed by Mr. Van Valkenburgh’s team. “It’s a romantic idea,” he said. “We wanted to surprise you.” Paths weave around the delicate branches of a magnolia variety called Green Shadow. His hand is seen all the way to the southern gate at Flatbush Avenue. Using more coiling pathways he draws the visitor around the majestic trees of the Native Flora Garden, and into a new display of maples from Japan and China that rise out of mounds of low herbaceous plantings. Younger trees turning pale yellow stand out against the still-green backdrop of mature trees.

In an earlier project, Mr. Van Valkenburgh improved Belle’s Brook, a stream that drains the pond of the Japanese garden and runs along the western edge of a parklike lawn. The riot of leaf shapes and hues of its water-loving plants contrast with the sober procession of specimen tree collections along the eastern edge — a contrast of traditional botanical magnificence and invented but authentic nature. “Though the stream looks natural and native there are plants from all over the world,” he said. “They may be French, North American or Japanese but they can play together.”

The stream culminates in the Shelby White and Leon Levy Water Garden, a naturalized focal point for the Discovery Garden and Children’s Garden near the southern entrance. The water-garden project includes a filtration system that returns the stream’s water to the Japanese garden pond, saving millions of gallons of fresh water annually.

The Woodland Garden completes a $ 124-million master plan conceived in 2000 by the former Botanic Garden president, Judith Zuk, and the chairman, Earl Weiner, and largely executed by Scot Medbury, who left in January. He has been succeeded by Mr. Benepe, who most recently came from the Trust for Public Land.

“My first obligation is to be true to what’s been done here,” Mr. Benepe said while walking through the garden. He’s looking at how the institution can lead when the coronavirus has made gardens and parks “more essential than ever for physical and mental health.” Across the country, he said, parks face funding crises.

The Botanic Garden’s extensive education programs continue via video; it sends plants to children to raise on their own. Mr. Benepe now would welcome schoolchildren to the garden in small groups. “The science tells us that outdoors are safer than indoors,” he said. Schools and the state government have yet to get on board with the plan, so it is up to parents to bring them here to see and touch the magic.