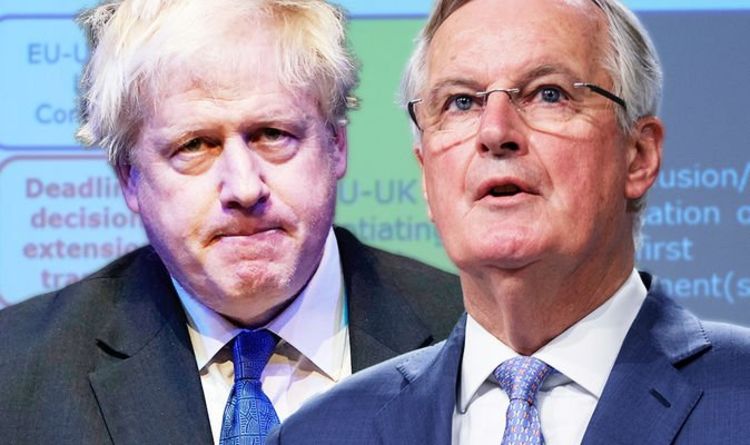 EU diplomats are working on a new set of negotiating guidelines that state Brussels should not dance to the Prime Minister’s tune. The move comes as member states work to harden their resolve before formal trade negotiations open with Britain next month. In a leaked draft of Mr Barnier’s new mandate, seen by Express.co.uk, the bloc will promise to “do as much as possible in the short timeframe”.

But diplomats have instructed their negotiator not to be held hostage by Mr Johnson’s refusal to extend the transition period beyond the end of the year.

The Frenchman has been warned to “keep in mind for its extension provided for in Article 132 of the Withdrawal Agreement”.

Under the terms of the Prime Minister’s divorce deal with Brussels, both sides can agree in July to a one-off extension for up to two years to allow more time for negotiations.

Mr Johnson has warned he is not prepared to keep Britain in the bloc’s single market and customs union beyond the end of the year.

The Prime Minister has also signalled he is prepared to walk away from the negotiating table if Brussels doesn’t offer the UK a speedy trade deal.

Today Mr Barnier echoed the warnings of Cabinet minister Michael Gove, who said failure to secure an agreement by the end of the year would result in border checks being implemented.

The Brussels negotiator told MEPs in Strasbourg: “If we fail to reach an agreement by December 31, on trade. The status quo will not remain, since on that day, as decided by the British Prime Minister, the United Kingdom will leave the customs union and the single market, and go back to WTO terms.”

He added: “In other words, above and beyond the checks that we’ll have to carry out on all products from the United Kingdom as a result of Brexit, just as we carry out checks on all third countries coming into the single market. We do so to protect our consumers and firms, above and beyond, those checks will need to come what may.

Diplomats are frantically working to further harden Mr Barnier’s mandate ahead of an EU ministerial meeting at the end of the month.

They have already instructed the European Commission official to take a tougher line on fisheries with Britain.

EU capitals want him to make tougher fishing quota demands in a bid to keep the status quo after the transition period ends.

MUST READ: ‘Don’t kid yourself!’ Gloves off as EU launches Brexit trade battle

An EU source told Express.co.uk: “It’s a way of pointing out that this is a relationship that will have to work out in the long run.

“We need a way to avoid tensions if either side feels the deal becomes unbalanced or unfair over time.”