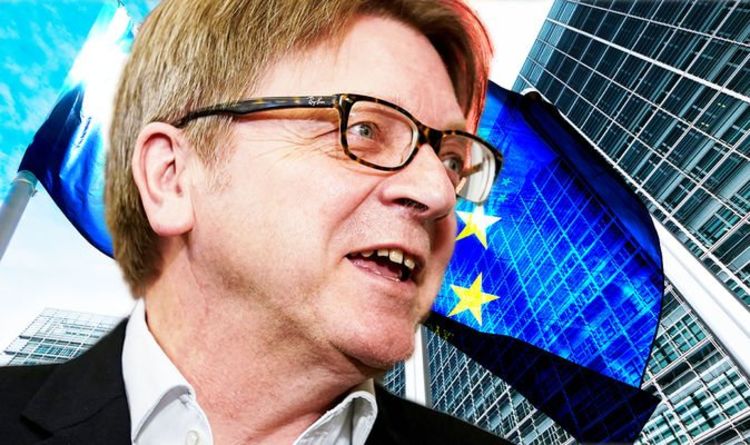 The former Brexit Coordinator for the European Parliament has ordered the EU27 to replace national contributions with a new tax revenue stream, as the bloc faces a £62billion (€75billion) black hole left by Brexit. Mr Verhofstadt called on Brussels to “revolutionise” the budget after EU leaders ended a marathon summit on Friday without a resolution to the bloc’s seven-year multi-annual financial framework (MFF). The arch-europhile said the EU needs its “own resources” and proposed the introduction of a tax on “big internet platforms or big polluters”.

The 66-year-old Belgian fears the EU risks being left behind by the two largest economies China and the US.

He wrote on Twitter: “It’s time to revolutionise the EU budget.

“Instead of national contributions, we need own resources (e.g. a tax on big internet platforms or big polluters).

“It’s the only way to defend our EU interests in a world dominated by ‘empires’ like the US & China.”

EU leaders failed to agree on a financial package for the 2021-2027 budget following 28 hours of talks in Brussels.

Clear divisions between the 27 member states resurfaced after several nations refused to contribute more funds for the spending package – worth around one trillion euros.

The so-called “Frugal Four” of Austria, Denmark, the Netherlands and Sweden, believe the budget should be capped at one percent of the trading bloc’s gross national income.

A number of the poorer member states and the European Parliament want to stick with a bigger budget of 1.3 percent.

The budget is also made up of customs revenue and income from fines levied by the commission.

EU Council President Charles Michel confirmed a breakthrough had not been made and insisted Brexit has made it a “very difficult negotiation”.

Mr Michel said: “Unfortunately today, we have observed it was not possible to reach an agreement.”

He added: “It’s a very difficult negotiation, especially after Brexit and the gap between 60 and 75 billion euros.”

Danish Prime Minister Mette Frederiksen stated he would maintain his ground and would not agree to the current terms being offered.

“But when it comes to the percentage, I stand firm.”

Angela Merkel highlighted the extent of the divisions and insisted it was clear from just seeing a glimpse of the budget that it would not work.

“They were playing out during the financial crisis a decade ago, during the migration crisis, we’re now seeing them on budget issues.”

Austrian Chancellor Sebastian Kurz remained optimised a breakthrough would be made sooner rather than later.

He said: “In the past it was always such. We needed two or three summits.

“I am hopeful to get a new breakthrough next time.”

European leaders will hold further talks at the next plenary session on Friday.

ByThis starkly contradicts the current global consensus, which is that the virus first emerged in China towards the end of 2019. However the Chinese claim...
Read more