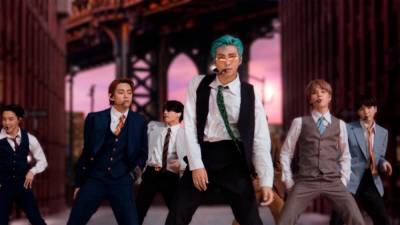 The first BTS single sung completely in English, Dynamite was released August 21 and tallied 33.9 million US streams in just a week, with 300,000 units sold.

BTS’s achievement comes after it reached the Billboard Hot 100’s fourth slot in March with its song On.

Three of BTS’ albums have hit number one on Billboard’s album charts, but this is its first Hot 100 top single.

BTS is the first all-South Korean group — comprised of J-Hope, Jimin, Jin, Jungkook, RM, Suga and V –to reign over the chart.

The first Asian artist to top the chart was Japanese-born crooner Kyu Sakamoto, whose Sukiyaki held the ranking for three weeks in June 1963.

K-pop –along with K-drama soap operas – has been one of South Korea’s most successful cultural exports.

A key component of the “Korean Wave” that has swept Asia and beyond over the last two decades, the K-pop industry is estimated to be worth some $ 5 billion. – AFP

Freddie Mercury spent a good chunk of the 1980s living and working in Munich, Germany. Not only did the Queen singer have his famously...
Read more
Entertainment

Developers Psyonix has confirmed that there are issues affecting Epic Online services tonight which are keeping Rocket League gamers off servers. According to the official...
Read more
Entertainment

Disney’s MCU solo movie Black Widow was originally set to release in Spring this year before being moved to late October in the UK....
Read more
Entertainment

No Man’s Sky 3.0 has been released and is part of the new Origins expansion released today by Hello Games. The first thing gamers will...
Read more

Among the new rules, pubs and restaurants will close from 10pm with only table service allowed, while wedding attendance was reduced to a maximum...
Read more