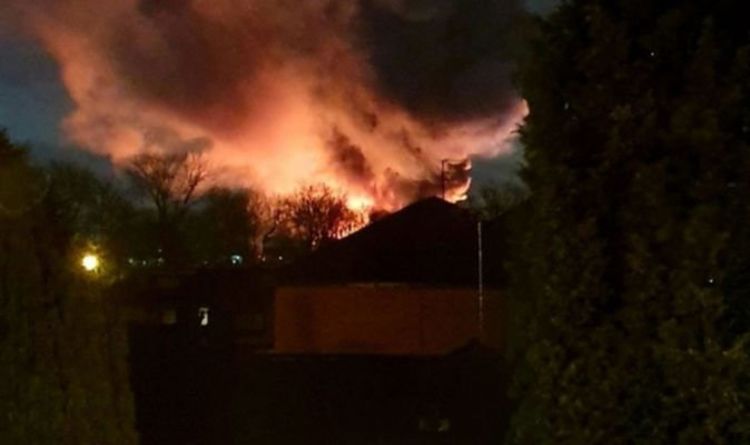 Firefighters were called to the fire near Pimhole Road at around 7pm on Thursday evening. Twenty fire engines are currently at the scene, trying to put it out. People living nearby have been told to keep windows and doors closed as a precaution.

On Twitter Greater Manchester Fire and Rescue Service wrote: “We are currently dealing with a fire in a scrapyard off Pimhole road in Bury.

“Firefighers are using two jets to tackle the fire.

“Please keep your windows and doors shut as a precaution and avoid the area where possible.”

They also urged people to not call 999 regarding the incident.

The service added: “We are aware and firefighters are currently tackling the fire which is approximately 30m by 30m and reaching 10m high.

“Residents are encouraged to continue keeping their windows and doors shut and avoid the area.”

Michelle Boudin explained that she could the horror blaze from her bedroom window.

JUST IN: Bushfire horror: Up to 17 people feared dead as blazing infernos

She said: “The fire is at the scrapyard at Pimhole, I believe the Autosave yard, it’s still burning now and I can hear the explosions from here.

“I would say my only concern is that it doesn’t spread to the farm which is very close to the yard.”

Justine Myers, 32, from Valley Mill Lane, Bury, said: “We can see the fire from our first floor living room.

“First noticed it around half 6. It’s absolutely huge, the smoke is heavy, heavy black and the flames are higher than the three story building in front of it.”