California earthquake: Is there a tsunami warning? 5.8 quake hits... 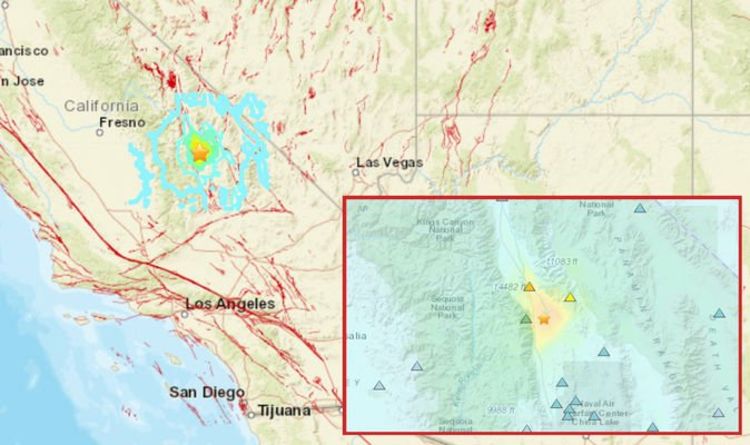 An earthquake measuring at magnitude 5.8 has hit California – a region prone to tremors as it sits on top of the feared Ring of Fire. The tremor struck Lone Pine, north east of Bakersfield where it was also felt. As it stands, there have been no reports of damages to building and thankfully no residents have been injured.

Nonetheless, people of the coastal state will be fearful of a tsunami, but no warnings have been issued, following the tremor which hit at 10.40 AM local time (18.40 BST).

Tsunami monitoring service WAVE said on Twitter: “There is NO #tsunami danger to BC coast following M5.8 #earthquake 95 miles NE of Bakersfield, California (per NTWC).”

One person who experienced the tremor wrote on Volcano Discovery: “Ground floor; shaking was very light. Some of my coworkers felt it and some didn’t. Doors swayed lightly on hinges, no more than a couple millimetres in either direction.”

Another said: “Definitely knew it was an earthquake. I saw the door to my office moving and the building creaking. It was startling.”

A third wrote: “I was asleep when I was woken up literally by being shaken awake by rumbling for almost an entire minute! It was pretty scary because I didn’t know what to do in that moment so I just held on and waited it out.”

The Southern California Earthquake Center (SCEC) said the latest tremor was a reminder that major quakes could strike at any time.

It said: “This morning’s M5.8 earthquake reminds us we live in Earthquake Country, we’re all in this together.

“Foreshocks occurred a few days ago, and we’re coming up on the nearby July 2019 Ridgecrest Sequence anniversary.