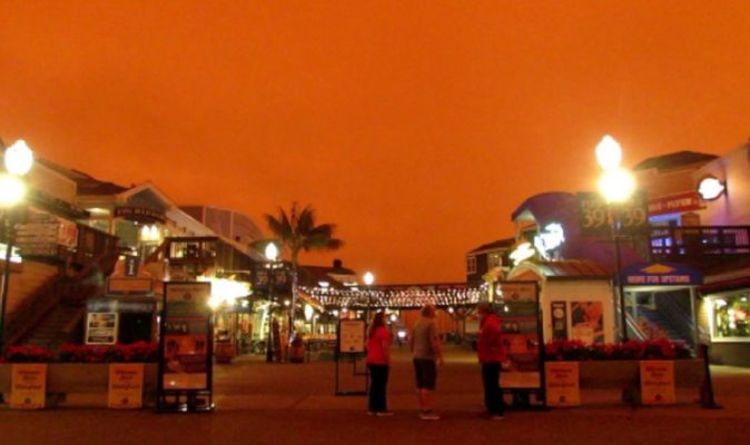 The US state of California continues to see record breaking wildfires which are still spreading across the Golden State. NASA satellite images have shown that 1.5 million acres, which is roughly 2,343 square miles, have been hit by this season’s wildfires.

But images from the ground show the sheer devastation of the wildfires.

Residents of San Francisco have taken image which show what the city might look like if it were on Mars.

The skies are filled with orange and red, with the thick haze blocking out the Sun’s light.

She said: “The atmosphere was eerie and apocalyptic.

“The sky was orange, and it was so dark that streetlights were on in the middle of the day. It felt as if the whole of San Francisco had moved to Mars.”

Another resident, Scott Boyd, told Space Weather: “I woke up this morning to a Mars-like orange sky that persisted throughout the day.

“High smoke coupled with a dense fog layer combined to make a featureless orange that blanketed the City by the Bay.”

Skies turn orange and red during large fires as the thick smoke blocks out short colour wavelengths such as yellow, blue and green, while longer wavelength colours, such as red and orange, can still make it through.

According to NASA, the wildfires this year have been astonishingly vast, with 20 major fires and fire complexes actively burning across California in early September.

Data from the Operational Land Imager (OLI) on the Landsat 8 satellite have shown the LNU Complex had burned 375,209 acres (586 square miles) by September 2, making it the third-largest wildfire by acreage in state history.

Eric Niiler Over the past 15 years, Chinese officials saved the lives of an estimated more than 200,000 residents by reducing the air pollution from...
Read more