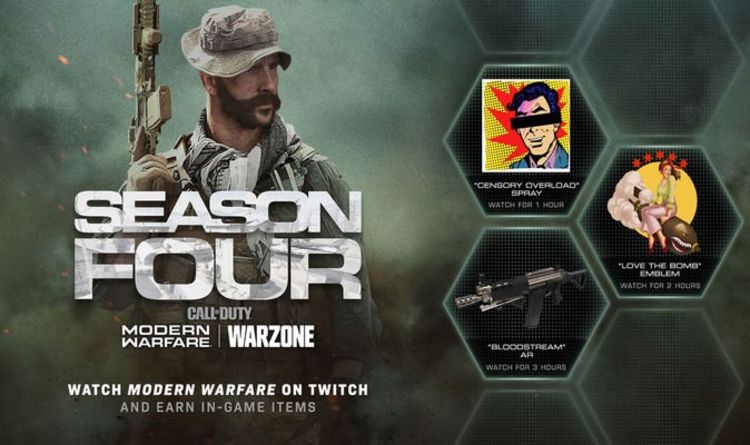 Activision has announced a new way for Call of Duty Modern Warfare gamers to unlock a new Blueprint.

And not only is this Blueprint a Grau variant, but it can also be used during a game of Call of Duty Warzone.

So it’s well-worth watching one of the new Call of Duty Modern Warfare Twitch Drops this week if you’re looking to revamp your loadout.

It’s also a good way for new COD gamers to get their hands on a Grau variant without needing to jump in with a basic version of the Grau.

As mentioned above, one of these is a Grau variant called ‘Bloodstream’ and it’s not the only reward on offer.

Gamers can also unlock the Censory Overload’ spray and the ‘Love the Bomb’ emblem if they watch longer enough.

To unlock all three and have a chance to update your Warzone Loadout, you will need to watch the right stream for over three hours.

A description of the Bloodstreams describes it as a “well-controlled and accurate configuration of Assault Rifle Juliet.

“Ideal for mid-range engagements in Multiplayer and Warzone, handle waves of enemies with ease thanks to the Sleight of Hand weapon perk for fast reloads and the Tac Laser to easily aim from the hip.”

To get yourself ready for Call of Duty Modern Warfare Twitch Drops, you will need to have a COD account that has been linked to an active Twitch account.

Modern Warfare Twitch Drops will be running from July 9 at 10 AM PT to July 16 at 10AM PT, meaning you only have a short window to do all of this.

On drop eligible streams you’ll see a callout that “drops are enabled”, so you know you are officially watching and earning. From there, click the stream and enjoy the gameplay.

You can watch multiple streamers or one stream but as long as they are “drop eligible” your total watch time will be tallied up, so you can earn rewards.