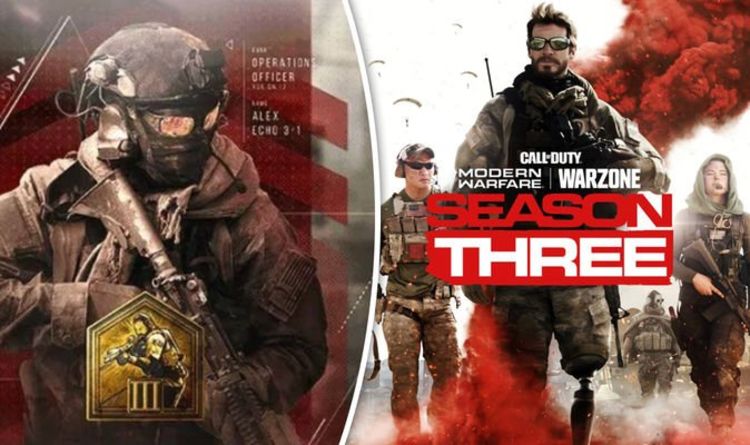 UPDATE 2: Call of Duty Season 3 could launch earlier than expected on PS4, Xbox One and PC.

An Activision source told Express Online that the Modern Warfare and Warzone Season 3 Battle Pass is expected to go live in the early hours of the morning for UK fans.

It’s likely that the season will begin once the double XP event ends at 7am UK time on April 8.

New multiplayer maps include Talisk Backlot (which is a remake of Call of Duty 4 Modern Warfare’s Backlot), the Hovec Sawmill and Aniyah Incursion.

Alex will also make an appearance as a new Operator, alongside other new characters within the Battle Pass.

As you can see from the trailer below, fans can also expect lots of new weapons and rewards.

Warzone fans will be able to ride new vehicles, and play in squads of four thanks to the new Quads mode.

ORIGINAL: Call of Duty Season 3 is about to begin in Modern Warfare multiplayer, Warzone and Special Ops.

The new Call of Duty Modern Warfare and Warzone season has an April 8 release date on PS4, Xbox One and PC.

The hotly anticipated Season 3 update will be accompanied by a lengthy list of patch notes, although thankfully there doesn’t appear to be any server downtime planned.

Call of Duty Season 3 will introduce a brand new Battle Pass, complete with a host of new rewards.

Judging by a recent Call of Duty Season 3 leak, fans can expect Operators to return and new gear to arrive, as “worlds collide”.

This almost certainly means we’ll see maps from previous games make a return, as well as popular Operators and maybe even classic rewards.

As you can see from the tweet further down the page, it looks like Alex from the Modern Warfare campaign will make an appearance in Season 3.

Considering the events of the Modern Warfare story mode, this may come as a surprise to fans.

Judging by the locations in the background, it looks like Call of Duty Season 3 will bring back Backlot and Village.

Not only does it look like the classic Backlot map from Call of Duty 4: Modern Warfare, but fans have discovered references to the location within game files.

The identity of the other map is a little more mysterious, and is currently being debated by hardcore fans.

While game files suggest it will be remake of the Village map from Modern Warfare 3, dataminers seem to have a different idea.

According to a recent post on Reddit, the Season 3 Village map is a lot different to the one from Modern Warfare 3.

Only time will tell if this turns out to be the case, or if Infinity Ward chooses to remake the map in full.

Needless to say, the Battle Pass – which is expected to cost 1,000 Call of Duty Points – will also come with new skins, weapons, blueprints and charms.

Arguably even more intriguing is how Season 3 will tie-in with the recently released Warzone mode.