Can NASA and Elon Musk lift off? 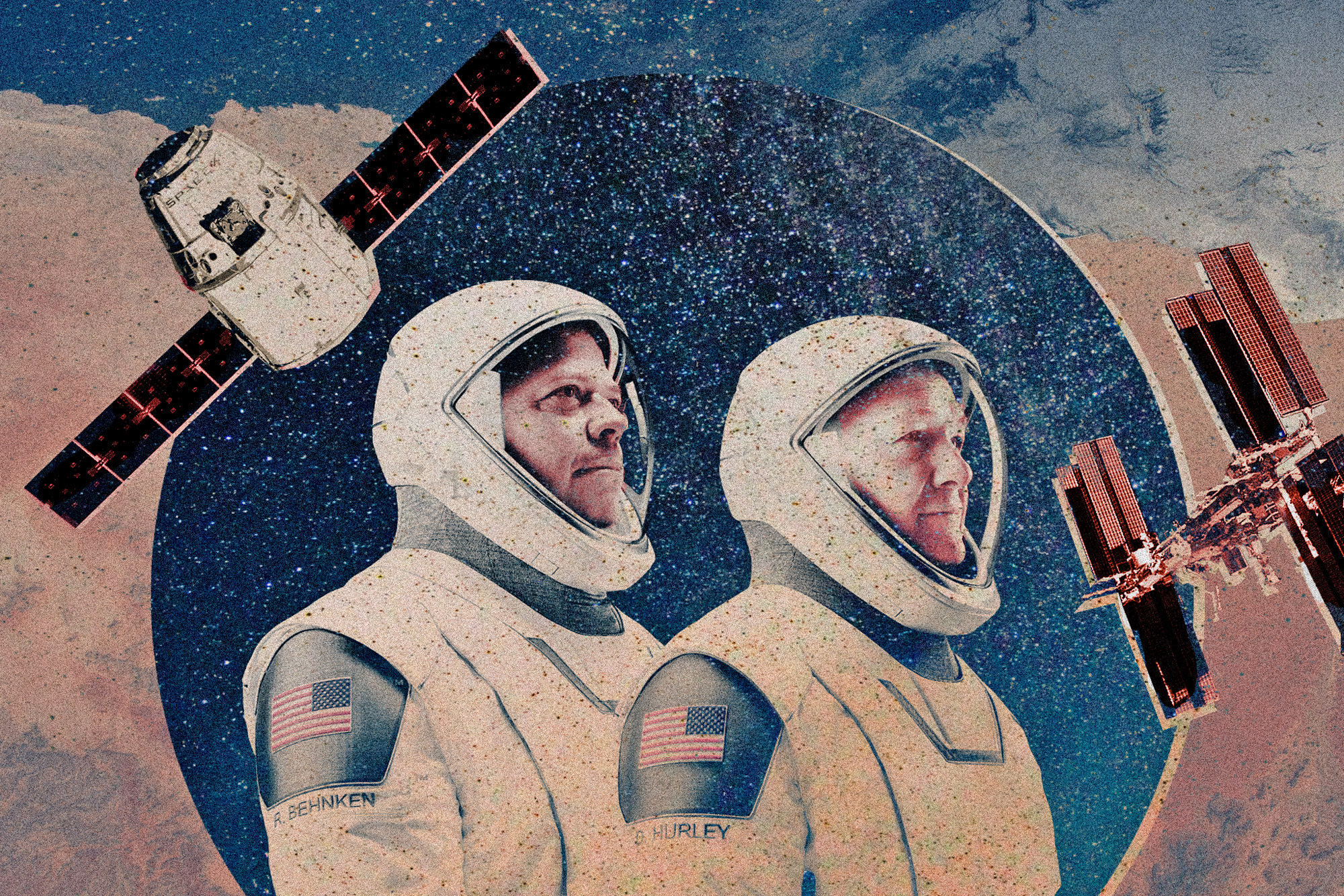 For now, NASA’s fortunes are tied to Musk’s, who has made headlines recently for antics like vowing to sell all his houses, denouncing coronavirus lockdowns as “fascist” and reopening Tesla’s electric-car factory in defiance of California health authorities.

But NASA has big ambitions beyond Wednesday, viewing this launch as a first step to working with commercial providers on ventures like private space stations or human travels to the lunar surface. Such partnerships with industry are a crucial way the agency, which is hustling to meet President Donald Trump’s demands for a moon landing in 2024, plans to stretch its dollars in the decades ahead.

Now it just needs Wednesday’s launch to prove that the commercial model can succeed for the riskiest missions, such as transporting people.

“We’re on the cusp of proving it,” NASA Administrator Jim Bridenstine told reporters.

Trump and Vice President Mike Pence both plan to attend the historic event. On Thursday, the president invited reporters at the White House to come as well, adding: “I’d like to put you on the rocket and get rid of you for a while.”

‘The promises of science fiction’

Some aspects of Wednesday’s launch might seem routine: It would be NASA’s 61st expedition to the International Space Station. The astronauts aboard SpaceX’s Falcon 9 rocket and Crew Dragon capsule, Douglas Hurley and Robert Behnken, are veteran spacefarers who have spent a combined 57 days in space and served as test pilots in the Marine Corps and Air Force, respectively.

But SpaceX’s role is a major departure from the traditional way NASA has sent its astronauts into space, during the decades when it funded, owned and operated its own rockets and shuttles. This time, under its Commercial Crew program, both the agency and industry will fund the privately owned spacecraft, and NASA will buy rides aboard vehicles that also moonlight as transports-for-hire for a growing space economy.

Wednesday’s mission is also a potential milestone in making space more accessible — to scientists, tourists or even Tom Cruise, who recently said he wants to film a movie aboard the space station. And it comes as other private businesses aim to take humans to the final frontier, including Amazon CEO Jeff Bezos’ rocket company Blue Origin and Richard Branson’s Virgin Galactic.

“Commercial Crew is the first step,” said Garrett Reisman, a former astronaut who is now a professor at the University of Southern California and a consultant for SpaceX. “A lot of the individuals doing this like Elon Musk, Jeff Bezos and Richard Branson are looking to fulfill the promises of science fiction. … What’s happening now is the beginning of a path towards that.”

But those hopes carry inherent risks.

SpaceX has already disrupted the industry, with its cost-cutting strategy of employing reusable rockets to launch satellites and cargo to the International Space Station. But the company has faced troubles getting to its first flight with humans onboard. One of the crew capsules exploded during a test in April 2019, grounding the vehicle for months during an investigation into the accident. The parachutes that will slow the capsule as it returns to Earth also failed in a May 2019 test. Neither test had humans onboard.

Another curveball is Musk, who has rankled some government officials by actions such as smoking marijuana on a 2018 video podcast — a big no-no for a government contractor with a security clearance that prompted NASA to conduct an investigation into SpaceX’s safety culture — and daring authorities to arrest him when he reopened Tesla’s plant near San Francisco.

Then again, wily and unpredictable government contractors are nothing new, as demonstrated by Howard Hughes, the billionaire director of “Hells Angels” who became a major defense contractor after founding Hughes Aircraft Co. in 1932. And so far, NASA has learned to accept Musk’s behavior as “just Elon being Elon,” according to two industry officials, because he mostly delivers on his promises. So has the Pentagon, which increasingly relies on SpaceX for sensitive national security missions.

NASA officials also have a lot of faith in Gwynne Shotwell, the chief operating officer who runs much of the day-to-day business at SpaceX. One industry official said NASA views Musk as more of a “figurehead,” but that the company under Shotwell is doing all the testing and safety checks the agency requires.

SpaceX did not respond to a request for comment. But Benjamin Reed, the company’s director of crew mission management, said at a pre-launch news conference on Friday that it views this week’s mission as a “sacred honor.”

“Those are meaningful words when we say that,” he said. “Our job is to carry Bob and Doug to the space station … and then we need to bring them home safely back to their families.”

The Commercial Crew program is also helping finance a competing vehicle — Boeing’s Starliner — which failed to reach the space station in December during a flight test without a crew. The capsule, which is still undergoing tests, is expected to redo that test flight this summer.

Since the project got underway in 2010, NASA has paid about $ 3.1 billion to SpaceX and about $ 4.8 billion to Boeing to develop their respective capsules. Both companies have fallen years behind schedule, according to a November inspector general report. The IG report also found that the space agency paid Boeing an “unnecessary” extra $ 287 million, in part to address a change in flight schedules caused by the company’s delay.

Space industry leaders say purchasing transportation services from the companies will save the government money, speed up development and promote innovation. But given the two companies’ delays, the Government Accountability Office urged NASA in June to come up with an alternative plan to send astronauts to the International Space Station in case both capsules weren’t ready on time.

NASA maintains that the Commercial Crew program over its lifetime will cost between $ 20 billion and $ 30 billion less than projected costs of the Constellation program, a government-led human launch effort that the Obama administration abandoned more than a decade ago.

“The commercial space industry has been promising disruption for some time now, and now we’re actually delivering on it,” said Tim Ellis, the CEO of Relativity Space, a space launch company, and a member of the National Space Council’s User Advisory Group.

Others, however, point out that private contractors have always built spacecraft for NASA. What’s different this time is who owns the space capsule, what logo appears on the side of the rocket and the fact that a SpaceX employee, not someone from NASA, will give the final go-ahead to launch, said John Logsdon, founder of the Space Policy Institute at George Washington University. He added that the biggest difference is “primarily symbolic.”

“It’s not that different from shuttle,” he said. “The power relationships are a bit different, but NASA is still in the loop with a veto. … What’s different is that there will be a SpaceX logo on the spacecraft and the rocket and that the final launch decision is the responsibility of the private sector.”

The goals of the Commercial Crew program to deliver routine access to space are not new either. The space shuttle was originally expected to fly to space once a week, but that never happened as the missions ended up being much less frequent and more expensive than originally projected.

The commercial approach is already being incorporated into NASA’s plans to reach the moon, however. As part of Project Artemis, which has a goal of returning humans to the moon by 2024, the space agency plans to invest alongside commercial companies in lunar landers to bring people to the surface, and then buy rides back and forth as a service.

Tourists and drug researchers in space

Supporters also see the launch of SpaceX’s Crew Dragon as a major step in opening up space to a much broader population.

For example, nations that don’t have the money or expertise to develop their own space programs could also purchase rides for their astronauts, similar to a space shuttle program that allowed international astronauts to travel as payload specialists. But in this case, the countries would be buying a seat from SpaceX or Boeing, not from NASA. As of yet, though, no foreign countries have booked a trip to space on one of the companies’ capsules.

And that’s only the beginning. For decades, rocket scientists and aeronautical engineers have imagined more ordinary people living and working in space. The Commercial Crew program could offer a portal into a private space economy.

“This is really just the first step,” said Tory Bruno, the CEO of the rocket company United Launch Alliance — a joint venture between Boeing and Lockheed Martin — and a member of the National Space Council’s User Advisory Group. “There is a time … just a couple decades away where ordinary people like you might live and work in space. All of that begins in [low-Earth orbit.]”

As soon as the next few years, SpaceX’s Crew Dragon and Boeing’s Starliner could ferry scientists in the pharmaceutical or other industries to the space station to conduct research, predicts Eric Stallmer, president of the Commercial Spaceflight Federation. “That will be made possible because of the routine access that Commercial Crew will offer,” he said.

ByTim Alberta It was an uncomfortable scene in every respect. I remember standing in the back of that gymnasium, taking it all in, comparing notes...
Read more
US

ByRyan Lizza Trump worked overtime to do that again on Thursday, but it did not go particularly well, before or during the debate. His campaign...
Read more
US

ByJohn F. Harris President Donald Trump, according to the advance line, needed above all not to present as a loudmouth boor as he did at...
Read more
US

ByRelated TopicsUS election 2020There are 11 days left and as candidates fly all over the country, they can watch the video to Ariana Grande's...
Read more