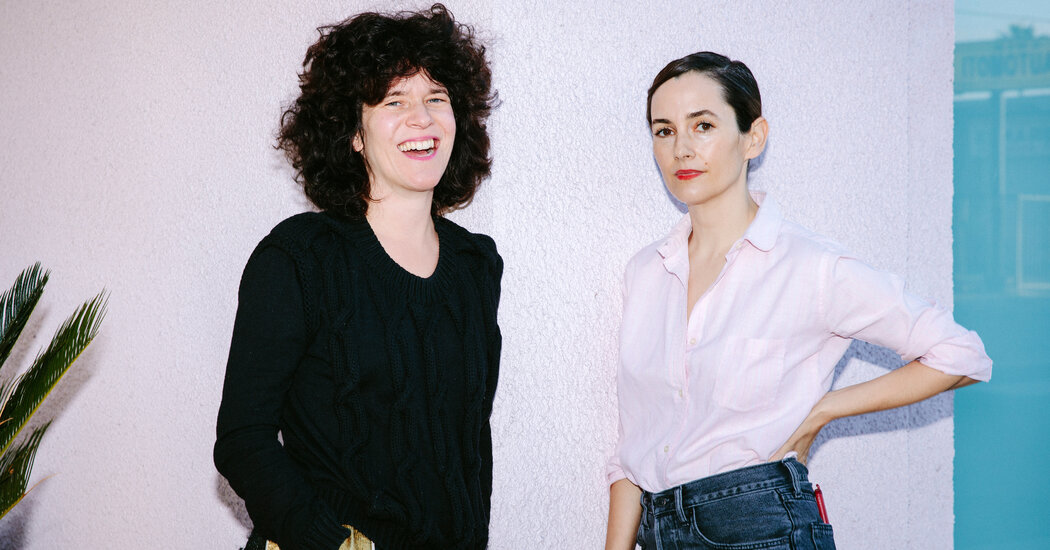 The concept of “blood” and “bleeding” is generally avoided in mass marketing for period products. It was only recently, and with some fanfare, that commercials showed red liquid being absorbed, instead of blue.

But when it comes to period underwear — an increasingly popular type of underwear made with extra-absorbent fabric — it’s difficult to avoid. At least when talking to the founders of the Period Company, a brand that was introduced in October, touting period underwear that was more affordable and sustainable than other menstrual products. For them, bleeding is a kind of profound act.

“Something emotionally begins to happen when you bleed into your underwear and you don’t have tampons, you don’t have pads, you don’t have waste — when you’re just allowed to really kind of be in your period,” said Sasha Markova, who, with Karla Welch, founded the company.

“Flowing is a very different experience, and we feel kind of evangelical about it.”

Ms. Markova, a longtime creative director, is not exaggerating about evangelizing; she refers to switching to their product as “conversion.” As in “We really converted ourselves to the idea of this underwear.” Or “The amazing thing you can begin to do with Gen Z is say: ‘OK, now we’ve got you. Hey, convert your older sisters and your mothers.’”

There’s a spiritual element to this approach, landing somewhere between typically Californian and harmlessly cultish. But conversion really is essential to running the business. The Period Company and every other brand making alternative products (such as the menstrual cup) needs customers who are open-minded enough to break from the products they’ve always used — the products their mothers handed them long ago, “sighingly, with a lot of burden,” Ms. Markova said.

It isn’t an easy adjustment, particularly when generations of women have been raised to dread leaks. (For a time, fear of humiliation was a hallmark of period product commercials, along with the blue mystery liquid.) And there is growing competition for those willing to convert.

Which is why it helps that the company was co-founded by Ms. Welch, a high-profile stylist whose clients include Tracee Ellis Ross, Olivia Wilde and Sarah Paulson. (On Instagram Chelsea Handler and Busy Philipps were among the celebrities giving unpaid endorsements to the brand, wearing matching gifted sweatshirts that read: “Dear Mother Nature: Thank You!”) Ms. Welch has also designed a line of tees in collaboration with Hanes, initially inspired by her client Justin Bieber, as well as jeans with Levi’s.

Four years ago, when her child’s first period arrived, Ms. Welch found herself in a “hot mess,” struggling to guide her now teen, who doesn’t identify as female, through the traditional options.

“Which made me go back to when I got my period, and my mom didn’t even talk to me about it,” she said.

Ms. Welch had also become increasingly determined to reduce her personal waste, including the plastic discarded every time she used an individually wrapped pad.

“I was like, ‘There’s got to be something better,’” she said.

This kind of zeal is fairly common when it comes to alternative period products. The internet teems with articles and videos preaching the gospel of the cup, in particular — even more so than period underwear — and the destructive evils of disposable tampons.

In 2018, this devotion led the Shelton Group, a marketing firm focused on sustainability, to conduct a survey about these products, collecting responses from more than 2,000 people with periods.

In the survey, nearly 60 percent of respondents said they have used or considered using reusable menstrual products.

“We were flabbergasted by that number,” said Susannah Enkema, the group’s vice president for research and insights. But it didn’t come as a surprise that the majority of that group was 18 to 34, the age group most concerned with the environment.

“It’s the perfect product category for Gen Z and young millennials who absolutely, more than any other age cohort, feel a desire — and to some degree an obligation — to go greener,” said Suzanne Shelton, the chief executive of the firm.

At the same time, about 20 percent of respondents said they had decided against reusables. They were more likely to be in their late 30s and 40s, Ms. Enkema said, and resistant largely because they’d already found what worked for them.

“The group that’s rejected these products is a group that doesn’t care as much about the environment,” Ms. Shelton said, pulling no punches with Gen X. “They care more about their personal convenience.” Conversely, the younger group had a different concept of convenience.

“I’m in my early 50s,” she continued. “The idea of period panties or the idea of a Diva Cup seems totally inconvenient. But to these young women, no. What seems inconvenient is having to go buy products every month.”

The younger group also tends to talk more openly about periods, seeing menstruation as a women’s empowerment issue and promoting the idea that “‘this is not dirty, this is not gross, it’s not embarrassing, it’s not something to be whispered about,’” Ms. Shelton said. (The researchers also learned from this group, qualitatively, that it’s no longer acceptable to refer to period products as “feminine hygiene.”)

Still, another 20 percent of respondents said they had never even heard of reusable products until the survey, Ms. Enkema said.

When Ms. Welch turned to period underwear for her child, it was a solution, but it wasn’t perfect. Most pairs ranged from about $ 25 to $ 40, and she didn’t want to pay $ 40 for juniors underwear.

The market’s two dominant brands are Thinx and Knix, both founded in 2013. At one point, Thinx was considered one of the fastest growing companies in the United States. It made headlines for its subway ads and its founder Miki Agrawal, the self-titled “SHE-EO” ousted in 2017 following sexual harassment allegations (which she denied). Another competitor, TomboyX, specializes in gender-neutral underwear, while Ruby Love (formerly PantyProp) was founded to help address urinary incontinence.

The founders of the Period Company said they’re fans of these brands, but, as Ms. Welch has repeated, she and Ms. Markova are more interested in being like Jockey, offering basic no-frills underwear, than like La Perla. Their prices fall between $ 12 and $ 14. (Comparatively, a pack of disposable tampon or pads typically costs under $ 10.)

Their underwear fits tightly but with some stretch, not unlike shapewear, if shapewear had a pad sewn into the crotch between two thick layers of cotton; converting to the underwear seems easiest for those who already rely on pads. There are a few different cuts, including high-rise and bikini. They’re all black, except for two gray junior-size styles. After a day of wear, the product is rinsed in the sink and wrung out, then laundered or hand-washed. Sizes go up to 3X, although the company expects that by the holidays, they will go up to 6X.

“The only way you can really have change is if you’re available to everybody, and you’re affordable and you’re willing to go to a really mass market,” Ms. Welch said. “We don’t want to be posh. We want to be accessible.”

There’s also nothing particularly sensual about the Period Company’s marketing, which uses a lot of text and even footage of the (bloody) cleaning process. Other companies tend to lean into innuendo (see those Thinx ads) or, like many fashionable underwear brands, emphasize an “all bodies are beautiful” approach with unretouched photos of diverse models.

But that’s the thing, Ms. Welch said. Despite her close industry ties, the Period Company doesn’t want to be a fashionable underwear brand.

“I honestly don’t think we live in a fashion category,” she said. “We’re essential, as far as I’m concerned. We’re as essential as the pads and tampons we bought. We live in that world, and I don’t want to live in the fashion world for Period.”

More than any other job she has held in fashion, the Period Company has given her “purpose,” she said.

“I love what I do, but I’ve always, my whole life, felt that I had a purpose,” Ms. Welch said. “Four years ago, when I was starting this, I just felt like I had stepped into that purpose.”