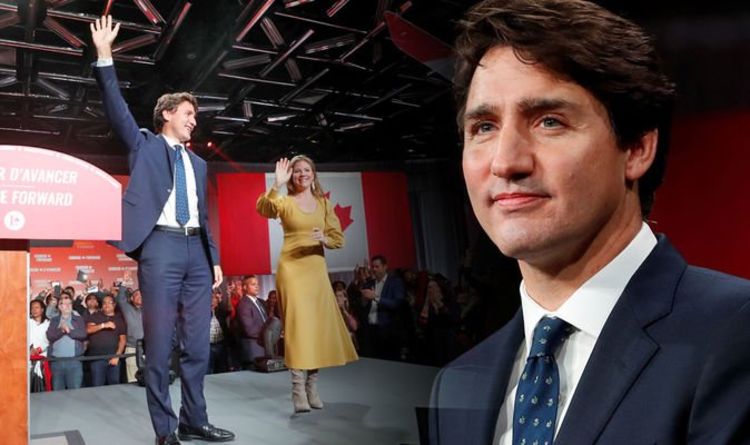 Canada elections today will decide who leads the country for the next four years as Prime Minister. The latest elections are seen as a threat to incumbent Prime Minister Justin Trudeau, who is hoping to secure a second term in office for the Liberal Party. Polls are suggesting neither Mr Trudeau nor his closest opponents will be able to score the majority they need. Election results are expected by 1am BST on October 22.

Canada’s recent election cycle has been defined by a war of insults, as parties trade blows in hopes to discredit one another.

Canadian residents are finding difficulty focusing on what aspects of public policy are the most important to them, according to Canadian pollster Nik Nanos.

Talking to CNN, Mr Nanos warned today’s elections were “a desert from a public policy point of view”.

He added results were a “coin toss” between Mr Trudeau and his closest rival, Conservative leader Andrew Scheer.

Australian ABC Election Analyst Antony Green has said that the Conservatives have actually received a higher share of the vote than the Liberals.

He tweeted: At this stage the Liberal Party will finish with a lower share of the national vote than the Conservatives, but win around 35 more seats.

“But it will be the lowest overall share for the combined traditional parties with both on around 34% each.”

Greens leader Elizabeth May will hold on to her seat, giving the Greens two confirmed and two expected seats.

Maxime Bernier, leader of People’s Party of Canada, has lost his seat.

One thing we can say from these exit polls is that it has been a disappointing night for Andrew Scheer. The Conservative leader have not made the gains they had hoped for, with Scheer’s attacking campaign failing to hit the mark.

The polls may project Liberals coming out with a minority, but the popular vote isn’t looking so positive. Liberals are currently at 35.6%, according to Global News, with Conservatives close behind at 32.4%. This is a remarkably low popular vote percentage for a leading Canadian party, particularly for a prime minister running for a second term.

CBC reports that the Liberal Party have won or are leading in 145 seats, compared to 119 for the Conservatives.

Pretty grim scenes at the Conservative Party headquarters, as results come in predicting Trudeau will hold on to power, albeit probably inn a minority government.

Martin Patriquin writing on Twitter spoke of the cheers at the Liberal Party headquarters in Montreal as CBC and Radio-Canada just called a Justin Trudeau government.

“Four more years!” chants the crowd—though it is still unknown whether it is going to be a minority or a majority government.

Canadian Broadcasting Corporation (CBC) have called the election for Trudeau, though have said “whether it will be a minority or majority government remains to be seen.”

First results on: Liberals hold onto bulk of seats in Atlantic Canada

Leyland Cecco has our first results of the night.

Number of seats the party has won or is leading in:

While the Liberals have lost a handful of seats in Atlantic Canada, the party has nonetheless emerged largely unscathed.

But as results from Ontario and Quebec begin to pour in, the race is expected to tighten considerably.

The separatist Bloc Québécois party is hoping to make substantial gains in Québec, stealing back seats the Liberals won in 2015.

In the suburbs of Ontario, Conservatives are hoping to make gains as well, but early results don’t look promising for the party.

Some polls are already predicting a minority government, with Trudeau’s Liberals failing to gain a majority.

The final polls are closingin the Canadian elections.

Liberals are in the lead but have likely lost their majority tonight.

The Liberal party is happy with its showing in Atlantic Canada but is still worried about Quebec.

Results have just come in from central Canada.

The NDP have ruled out joining the Conservatives, but leader Jagmeet Singh has said he would “absolutely” consider partnering with Trudeau’s Liberals.

Projections from the Maritimes, including in Sydney-Victoria, where the Conservatives lead the Liberals, who held the seat before of not come in yet.

Just 127 votes separate the two at the moment.

Unless the Conservatives get close to the 170 mark, it’s unlikely they’ll be able to form a coalition government.

This area represents the bulk of the seats: 263 seats and 21.5 million potential voters.

NDP have won their first seat in Atlantic Canada.

The Liberals took this seat in 2015, and were part of Trudeau’s red wave.

As the first polls close in the Canadian election experts say it is still too close to call.

The first polls closed in the Canadian election at 7pm EDT (11pm UK time) on Monday in , according to a schedule issued by Elections Canada.

These were the provinces of Newfoundland and Labrador, which account for seven of the 338 seats in the House of Commons.

The Liberals of Prime Minister Justin Trudeau, who are seeking re-election, won all seven in the 2015 election that brought the party to power.

The last to close are those in the Pacific province of British Columbia, which will shut at 10 p.m. EDT (0200 GMT Tuesday).

Liberal Seamus O’Regan is the first minister to be re-elected according to polls, with 50% of the vote in his Newfoundland and Labrador riding.

He has been serving as Minister of Indigenous Services.

According to polls so far Liberals are in the lead in Eastern Canada, but Conservatives are performing much better than they did in 2015.

In Atlantic Canada, the polls reporting so far are putting Liberals at 16 and Conservatives at 7.

That plays out as a -10 loss for Liberals, according to Global News, which would alone be enough for Trudeau to lose his majority.

The first elected MP is Liberal Yvonne Jones in Newfoundland.

This isn’t a surprising result as Newfoundland has gone Liberal 45 of the last 47 years.

Polls are starting to trickle in, with Liberals in Newfoundland leading with six ridings.

However interestingly the popular vote is showing a big difference from 2015.

However data so far shows the parties at 51% and 34% respectively.

Voting results are expected to come in first from Atlantic Canada at approximately 6pm EST (11pm in the UK), but more indicative results likely won’t emerge until after polls close in Ontario and Quebec at around 9.30 pm EST (2.30 am in the UK).

Final polls will close at 10pm EST in British Columbia (3.00am in the UK).

With 170 ridings needed to win a majority government, here is how each of the parties stand at dissolution:

And here is a reminder of the candidates:

With exit polls not expected for another few hours, it is worth visiting one of the possible outcomes.

A Canadian Parliamentary coalition hasn’t taken form in well over 100 years, with the last time during World War One during 1907.

However, the dead heat between Trudeau and Scheer may necessitate one for a new government to take form.

The two parties most likely to team up are the Liberals and the NDP, with NDP leader Jagmeet Singh saying he is “absolutely” open to coalition talks.

Mr Scheer has caught onto this, and told supporters yesterday: “The choice tomorrow is between a Liberal-NDP coalition that will run massive deficits and leave less money in your pocket or a Conservative government that will get back to balanced budgets and make life more affordable.

“Trudeau would pay any price to stay in power and he’d use your money to do it.

“We want Canadians to send Conservative MPs to Ottawa to undo the damage that Justin Trudeau has caused.”

Two main issues may hold voters back from voting for Justin Trudeau this year.

The Prime Minister is hoping to build oil pipelines through Canada, which would help bolster the country’s industrial economy.

However, he is also hoping to meet targets set for the country by the Paris Climate Agreement, something many have taken as bluster as he has not revealed how he intends to do both.

She said: “The point is right now, we need to get elected.

“If we are re-elected we will look at how best to do this.”

Voting tines vary by constituencies in Canada, which is split across more than one time zone.

Voters go to the polls at the following times: