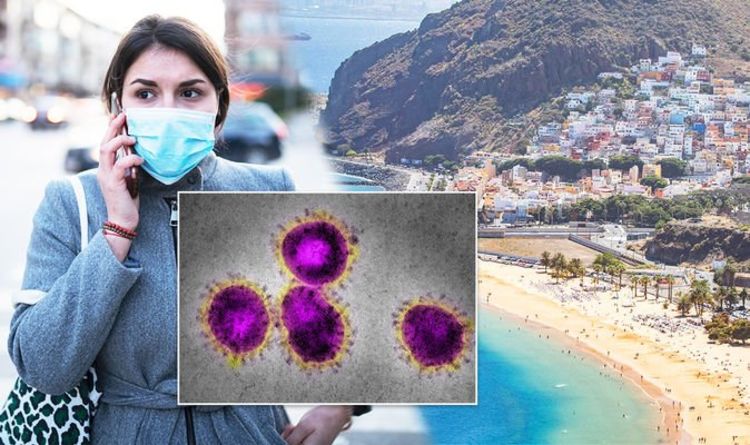 A hotel in Tenerife has been forced into quarantine after one of its guests was confirmed to be suffering from coronavirus. Now, all 1,000 of the hotel’s guests are being kept in lockdown in a bid to stop the spread of the virus, but is it enough to keep the holiday resort safe?

The FCO has issued a statement for travellers visiting Spain regarding the COVID-19 outbreak. It reads: “There is an ongoing outbreak of coronavirus in China and elsewhere, including Spain.

“The virus originated in Wuhan City, Hubei Province, China, but cases have been confirmed in other parts of China and in some other countries, including Spain.

“You should comply with any additional screening measures put in place by the authorities.”

At present, there is no warning to say holidaymakers should avoid the region, though they should exercise caution and stay up to date with developments as this could change.

The man is the third person to test positive for the virus in Spain.

The first having been a German tourist on holiday in La Gomera and the second, a British man living in Mallorca. Both of these have since been cleared and released from hospital.

READ MORE: Coronavirus Italy travel advice: Is it safe to travel to Italy?

Currently being kept in lockdown, the man admits to feeling feverish for several days prior to being diagnosed.

Believed to be a doctor, the man travelled to the holiday hotspot from the Lombardy region-the centre of the outbreak in Italy.

Canary Islands president Angel Victor Torres said: “This afternoon the coronavirus protocol has been activated for an Italian tourist in the south of Tenerife.

“The result from the first test carried out in the Canaries is positive. Tomorrow new tests will take place in Madrid. The patient has been quarantined.”

Reports are coming in that a highly popular hotel in Costa Adeje was put on lockdown last night.

The Italian man had been staying there with his wife for more than a week.

Island newspaper Diario de Avisos says: “Strictly following the protocol of action that the Spanish and Italian authorities have established for these cases, the State security forces and bodies have for some hours prevented any of the clients staying in the complex from entering or leaving the complex.”

Official confirmation and an update is expected shortly.

Police are said to be outside of the hotel making sure no one enters or leaves, according to local reports.

A spokesman for the regional health authority added: “The protocol states that a second test must take place at the National Microbiology Centre at the Carlos III Health Institute in Madrid.

“The patient has been quarantined and is under the care of health workers.”

Details are only just coming in about the positive diagnosis and as yet, there are no confirmed details about the man’s age or whether he is a permanent resident of Tenerife or on holiday from Italy.

Spanish newspaper Diario de Avisos says he was staying in Adeje which is the most popular holiday resort of Tenerife. The exact district has not been specified.

El Dia says the man IS a tourist and may have arrived in Tenerife a week ago, having come from the Lombardy region of Italy where several people have died from coronavirus. There are unconfirmed reports that he is in the medical profession.

The first test was positive today, after which a second test must be carried out tomorrow, which will be sent to the Carlos III Institute in Madrid, as established in the protocol.

A formal statement issued tonight by the Canary Government confirmed: “The Ministry of Health of the Government of the Canary Islands, through the General Directorate of Public Health, reports that the protocol established reference coronavirus has been activated after confirming that an Italian citizen has given a positive first in the coronavirus tests carried out this afternoon in the Our Lady of La Candelaria University Hospital (in the capital of Santa Cruz). The protocol establishes the obligation to perform second tests at the National Centre for Microbiology of the Carlos III Health Institute. The citizen is isolated and under sanitary control.”

“In coordination with the Ministry of Health, the same protocol has been activated in the Canary Islands that has been put in place as with the other suspicious cases in other parts of Spain.”

“The Ministry of Health has activated a toll-free telephone line 900 112 061 from which a Nursing team, under the coordination of the Canary Islands Emergency Service (SUC), will respond to requests from citizens for information on prevention measures, possibilities of contagion and false concepts related to the virus.”

The German tourist who was tested positive in La Gomera was kept in isolation for two weeks before being given the all-clear. He showed no signs of being unwell during this time. Five of his companions also had to be kept in quarantine, despite testing negative. All have now returned to Germany.

The British man who tested positive in Mallorca where he lives is also now clear and has stressed he too had no symptoms and did not feel unwell. His wife and two daughters were tested negative.

Health chiefs in the Canaries have previously asked people not to panic and have assured that the island’s hospitals and medical staff have all the expertise and updated training necessary to deal with coronavirus cases.

This brings the current number of global sufferers up to 80,248 at the time of writing.

Meanwhile, the virus is now raging through Europe, with Italy being one of the most severely affected regions.

There are currently 231 confirmed cases in the country, with seven fatalities since Friday.

The Italian government has sent infected regions, mostly in the north of the country, into quarantine with severe consequences for those who go against official advice.