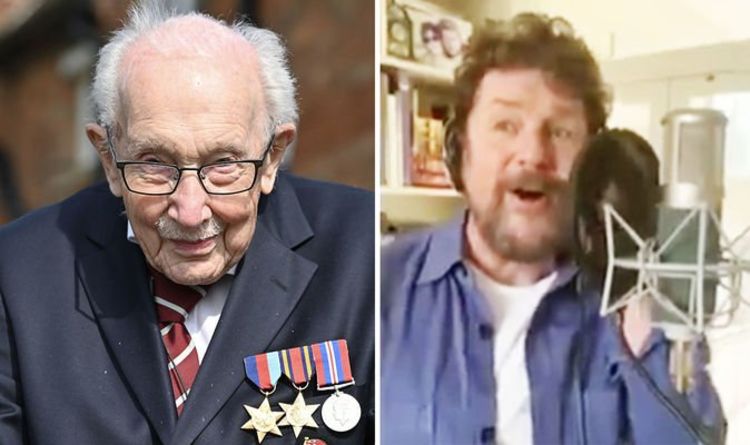 The 99-year-old veteran and Michael Ball have topped the UK charts this week with their No 1 charity single. Captain Tom Moore teamed up with the singer for You’ll Never Walk Alone, which also features The NHS Voices of Care choir. The debut single went straight into The Official Big Top 40 chart at No 1.

The charity single is raising even more money for the NHS following Captain Tom’s inspiring 100 walks around his garden, which has already raised over £25 million.

Initially, the Second World War veteran was hoping to raise around £1000 before his 100th birthday on April 30.

Having completed 100 laps of his garden on Thursday, the charity single with Ball was released on Friday.

The track has also topped No 1 in the UK iTunes chart this week.

On performing You’ll Never Walk Alone, Captain Tom said: “I never in my wildest dreams imagined I would be releasing a single with Michael Ball OBE.

“But I also never thought it possible for me to walk in the garden and raise millions.

“So why not sing, spread some cheer and again – raise money for our national heroes. NHS this one is for you!”

While Ball said in a statement: “There isn’t one of us who has failed to be inspired by Captain Tom Moore.”

Dame Vera, who recently turned 103, said of the song: “The words ‘We’ll meet again’ speak to the hope we should all have during these troubling times.”

While Jenkins added: “It is a song of hope and Dame Vera and I sing this in honour of (and in aid of) our superhero NHS workers and their families. They are putting themselves at risk to ensure we will meet our dearest again.”