Captain Tom Moore to get special honour to recognise 'heroic'... 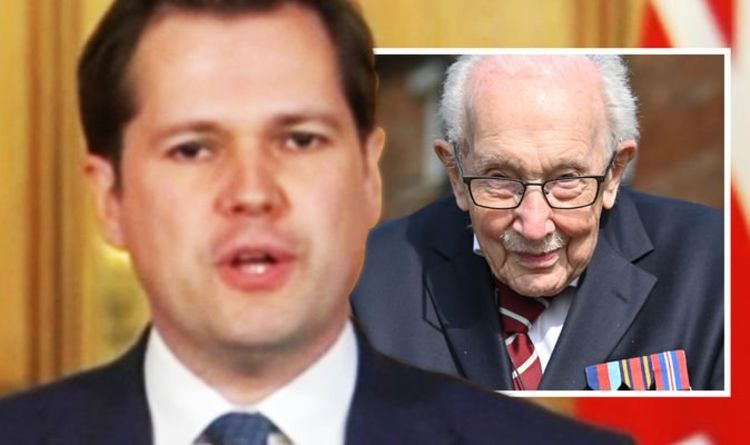 Housing and Communities Secretary Robert Jenrick confirmed the news at Downing Street during the Government’s daily coronavirus update. Referring to the work of Britons helping in the fight against coronavirus, he said: “We have all been humbled by the gestures, large and small, of people across the country. There are truly extraordinary efforts underway in this regard. None more so than Captain Tom Moore who has raised an astonishing £23million for NHS Charities.

“I can’t think of a more worthy person to be the guest of honour at the opening of the new Nightingale Hospital in Harrogate next week.

“Also, fittingly, the county of his birth, Yorkshire.”

Mr Jenrick praised the 99-year-old veteran for his efforts, urging Britons to do the same.

He said: “I am sure you will all want to join me in thanking Captain Tom for his truly heroic efforts.”

Captain Tom has won the hearts of the nation and the world with his awe-inspiring fundraising endeavours.

The war hero’s JustGiving page has attracted an almost unprecedented wealth of interest.

The page appeared to crash on Saturday morning as the donation website struggled to cope with the sheer number of pledges, reported Sky News.

Commenting on the error, Sky News’ Stephen Dixon said: “I don’t believe no-one has donated in an hour, I think their system has crashed.”

Captain Tom, who uses a walking frame with wheels since breaking his hip, initially hoped to raise the modest sum of £1,000 by completing 100 laps of his Bedfordshire garden before his 100th birthday on April 30.

Inspired by the brilliant care he received after his injury, Captain Tom, who served in India, Burma and Sumatra during World War 2, wanted to give something back to the NHS.

He has since become a symbol of British endurance in the face of adversity.

Captain Tom’s incredible achievement has struck a chord with people across the UK and the wider world, bringing a ray of hope amid the horror of the coronavirus outbreak that has killed more than 147,000 people worldwide.

The war veteran even won the royal seal of approval, with Prince William, the Duke of Cambridge, branding him an “absolute legend”.