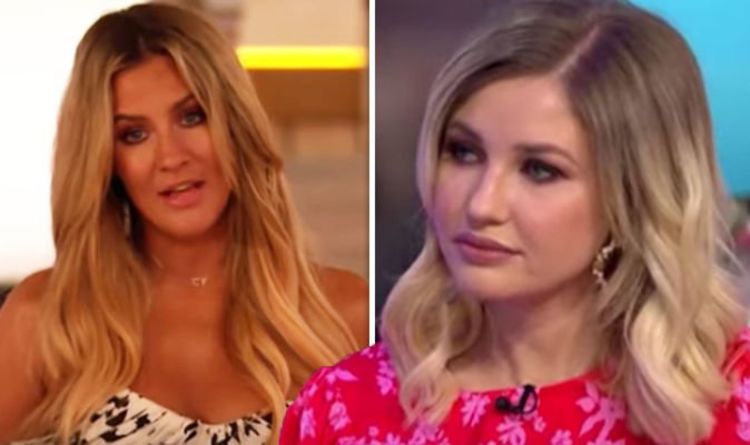 Love Island 2018 star Amy Hart, 26, has revealed Caroline Flack “squeezed her hand” to protect her before her ex-boyfriend Curtis Pritchard, 24, returned to the ITV2 show’s villa with another girl. AJ Pritchard’s younger brother had chosen to recouple with Jourdan Riane, which Amy was unaware of when she dedicated a heartfelt speech to her boyfriend of four weeks.

The former air hostess recalled Caroline gave her a secret signal to stop talking before Curtis appeared with Jourdan.

She told the Good Morning Britain hosts today: “Obviously, when I come back from Casa Amor, she [Caroline] was squeezing my hand, basically telling me to shut up because I was baring my soul when I shouldn’t have been.”

Love Island host Caroline took her own life at the age of 40 over the weekend following the news she would still stand trial on March 4 after being accused of assault.

Amy addressed the sad news of the TV personality’s death, explaining she was “really gutted”.

The Celebs Go Dating star said: “I was gutted, really gutted. All my love to her friends and family.

“I didn’t know her that long but the changes she made for all of us [on Love Island], she went above and beyond her role.”

Amy continued: “Caroline was a huge part of the biggest thing that has happened in my life. She was amazing from putting us all at ease in the breaks during filming saying, ‘Are you alright, are you alright?’

“Finding the words to express them [her views] is hard because they are wrapped in sadness, anger and guilt.

“Yes, guilt. Because for all the fingers being pointed – whether at the press, social media or the Crown Prosecution Service (CPS) – millions of us took an interest in the dramatic turn of events in her life, which started with the alleged beating of her boyfriend. People were hungry to know more,” she stated.

“I was one of them. Clicking on headlines about police being called to her London flat, reading reports she had hit Lewis Burton over the head with a lamp while sleeping,” she said, admitting outsiders were “shocked” and “lapped up” the various reports.

“I was baffled. It was a mystery. What was up in the life of this girl who seemed to have it all?” Martel wondered.